Keeping watch over the birthplace place of Tseshaht

The Broken Group Islands are closely watched by the First Nation each summer, reminding visitors that the area is more than a ‘wilderness’ destination. (Melissa Renwick photos)

A thick layer of fog wrapped around the Broken Group Islands on an early morning in late-July. It acted like a veil, withholding the beauty of the islands’ white sandy beaches, rocky outcrops, and the surrounding turquoise waters.

The region is a mecca for kayakers and boaters alike who flock to the remote set of islands every year, which Parks Canada has long been describing as a “wilderness” destination.

“To call this wilderness is just patently absurd,” he said.

For 48 years, St. Claire has worked as an archeologist in Barkley Sound. It’s because of his life’s work that the region ranks among the most extensively studied in the Northwest Coast.

The existence of 180 archaeological sites in the Broken Group indicates that Tseshaht First Nation, along with several nations that amalgamated with Tseshaht, have occupied the area for over 5,000 years, he said.

One program is helping to change the islands’ “untouched” perception by teaching visitors about the region’s cultural legacy.

In 2012, Tseshaht First Nation partnered with Parks Canada to create the Beach Keeper Program, which directly involves the nation in the stewardship of the land.

Six Tseshaht members are currently employed as beach keepers and act as the nation’s “watchers” and “speakers” for the group of islands from May through September.

Lead beach keeper Hank Gus said he likes to greet every visitor by introducing himself and his fellow beach keepers to make sure “everyone feels welcome and safe.”

By logging visitors’ movements through the islands and recording the number of people sleeping at the seven designated campsites, Gus said they can account for travellers in the event of an emergency.

They also share stories about Tseshaht’s birthplace, remind tourists of campfire bans, as well as provide visitors with wildlife and weather updates, like the 8.2 magnitude earthquake that recently struck off Alaska’s coast.

The nation’s direct involvement in stewarding the islands is helping to create public awareness “that people have lived here for millennia,” said St. Claire.

While the 74-year-old said it was long overdue, it’s a step forward in the cultural preservation of the area.

As the area’s historical importance is being recognized, referring to the islands as wilderness is necessary to encourage visitors to come prepared, said Parks Canada superintendent Karen Haugen.

“When communicating with visitors, Parks Canada refers to natural settings that are removed from amenities such as roads, accommodations, and stores as wilderness areas,” she said. “This way, visitors can better assess whether they are ready for a backcountry experience and prepare accordingly.”

A legacy of whalers

Gus’ interest in his homelands was sparked while working on an archeological dig led by St. Clair on Benson Island in 2000.

“I started getting a taste of my roots by tracing back our history,” he said.

Since then, Gus said he felt an “urgency” to return home.

He has been stationed as a beach keeper on Keith Island every summer since the program’s inception in 2012.

Despite living in Port Alberni most of the year, “To me, the broken islands are home,” he said.

“Being able to live and work in our homelands helps our spirit grow strong,” he added.

Memphis Dick is working as a beach keeper for her first season and considers Gus a mentor.

Each time she listens to Gus tell the Tseshaht origin story to visitors, she remembers it in greater detail.

“I don’t know how to explain it, but it just feels right to be here,” she said. “It’s empowering to know that years ago we lived on these islands and canoed to each place.”

As part of a three-year archeological project led by St. Claire, a pile of whalebones was exposed in one of the excavations on Benson Island in 2000.

Lab testing identified that the stack of bones came from five different whales that dated back at least 500 years, said St. Claire.

“It would’ve been in front of the house of a whaler who was advertising his abilities,” he said. “Whaling [was a] way that somebody in the chiefly class could advance themselves.”

St. Claire said it was typically rare for people to move beyond the class they were born into.

“But if you could potlatch more than anyone, or were a more successful whaler, then your prestige went beyond what your birthright within the chiefly class would normally assign to you,” he said.

This is why Tseshaht translates to “the smell and the decaying of whale bone along the beach,” explained Gus.

‘The beginning of our time’

St. Claire understood early in his career that excavating without knowing the cultural background of the area was half-hearted.

In the late 1970s and early 1980s, he worked closely with around 23 elders to make recordings and understand Tseshaht’s cultural ethnographic background.

In his research, St. Claire studied the works of famed anthropologist and linguist Edward Sapir.

Over a century ago, Sapir worked with Tseshaht members born in the mid-1800s who recounted the Tseshaht origin story as taught by their grandparents.

“Those are the versions that I find the most informative,” said St. Claire. “I recount them to my students, and anyone else who will listen, all the time.”

Gus was among them and continues to share the nation’s origin story to those visiting the broken group.

In the accounts by elders who spoke with Sapir over 100 years ago, Kapkimyis was either the son or the brother of Kwatyat, the supreme supernatural being and creator of all things within the Nuu-chah-nulth belief system.

As the story goes, Kapkimyis was gifted new abilities from Kwatyat. Eager to show them off, Kapkimyis found a mussel shell and used it to cut the inside of his thigh. After collecting a puddle of his own blood into the palms of his hands, he blew into the blood to create new life in the form of a little girl.

Kapkimyis made another cut on the inside of his other thigh and after scooping up the blood, he created a little boy.

The two children represent “the beginning of our time – night and day,” explained Gus.

Kapkimyis showed the children the ways of living and gave names to the surrounding 50 different species of mammals, birds, and shellfish. He showed the children how to catch, prepare and store the food, much of which came from a river that was plentiful with salmon.

When he noticed Tseshaht’s first female and male bickering, he cautioned them and said, “that is not the way to live.”

And yet, their arguing continued. In a fit of anger, Kapkimyis destroyed the river as a punishment to them, breaking the island into hunks of rock and soil that drifted apart, and eventually fixed into place.

This, St. Claire said, is what created the Broken Group Islands as they are today.

The origin story was often told by grandparents to children, St. Claire said. It was used to teach lessons about the importance of working together and sharing with your family and community.

Signs in English and French

While on a kayaking trip, Peter Tyszewicz said he had “the pleasure” of meeting Gus and the beach keepers, who shared Tseshaht’s stories with him.

“It’s a cultural experience,” he said. “It provides a different context and appreciation for the place.”

Aside from Keith Island, all the Parks Canada signs on the islands are written in English and French. For around two years, Gus said the nation has been in conversation with Parks Canada about replacing the signs to include the islands’ traditional names written in Nuu-chah-nulth, along with providing cultural background of the area. While the move is still in conversation, Gus and St. Claire remain hopeful.

Haugen said that Parks Canada is committed to recognizing national heritage places that honour the historic and contemporary contributions of Indigenous peoples.

“Visitors have expressed great support for this program as developing appreciation for the area through in-person conversations with a beach keeper [that] can significantly enrich their experience,” she said.

Not only is the beach keeper program developing a greater sense of understanding for tourists, but it also instills Tseshaht with pride, said St. Claire.

“There are Tseshaht members down there learning about their history and sharing it,” he said. “It heightens the awareness and appreciation of the nation members themselves. It educates them and makes them want to come down and see it for themselves.”

When Tseshaht members do visit the islands, Gus said he can’t say “welcome to the islands.” 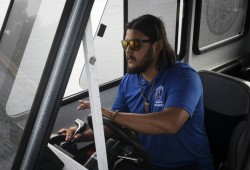 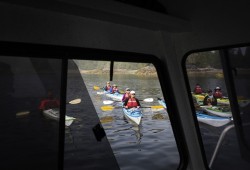 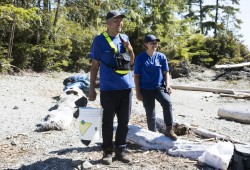 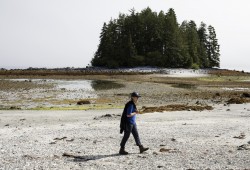