Drug addictions resources everywhere, but out of reach for many in need

Two Nuu-chah-nulth mothers are fighting for their sons to break free from drug addiction – but supports are not as accessible as they would hope.

Jackie Dennis of Huu-ay-aht had to wait more than a month to get her heroin-addicted son an online doctor`s appointment so that he could get on a methadone program. Without methadone her son would suffer terrible withdrawal pain and craving - or go back to using heroin. She was fortunate enough to find a friend of his that shared methadone as they continue to wait to get on the program.

Grace Frank of Tla-o-qui-aht hopes that her son will quit drugs someday and she takes him home from time-to-time. But with no access to detox beds, her son returns to the streets and back to drugs.

Port Alberni`s Shelter Outreach Centre, called SIS or Safe Injection Site by some, offers harm reduction supplies, referrals and medical professionals that can intervene during an overdose. A visit to the facility on lower Third Avenue found three Nuu-chah-nulth people wanting to get off of the streets and out of addictions.

A local man grumbled something about his family and said he’d rather stay on the streets – but, he said, nobody can tell what’s in the street drugs. Another, from a remote community, said he wants to go home but there’s no Naloxone kits there. He said he was still upset about a friend of his who died of an overdose there because there was no Naloxone, a lifesaving medication that can temporarily reverse an opioid overdose. And there’s no place to detox at home.

Getting people on long-acting drugs

Ha-Shilth-Sa reached out to Jim McCarthy, Manager for Mental Health and Substance Use, and learned that he is in office once a week. Two weeks after reaching out to MHSU an envelope with brochures about available services was provided.

The MHSU Port Alberni is located at 4780 Roger Street, offering a variety of professional support for those struggling with addiction. The MHSU assists clients with Opioid Agonist Therapy (OAT), which helps those addicted through the withdrawal process using methadone or Suboxone. These medications work to prevent withdrawal and reduce cravings for opioid drugs.

Methadone and Suboxone are long-acting opioid drugs that are used to replace the shorter-acting opioids
the person is addicted to. They act more slowly in the body, for a longer period of time. By acting slowly, it prevents withdrawal for 24 to 36 hours without causing a person to get high.

But the hours and requirements for these services don’t work for many on the street.

Grace Frank points to the lack of support in her community, not only for people wanting treatment, but also for those that have completed treatment. She says that there is no Alcoholics Anonymous or similar support groups in the Tofino area. She says there is one alcohol and drug counsellor who serves three or four of the west coast First Nations communities.

According to the First Nations Health Authority, Indigenous peoples are disproportionately represented in overdose deaths in the province.

“We see drug use as a health issue rather than a moral issue,” reads the FNHA website.

The FNHA has developed a framework for action – their response to the toxic drug crisis for First Nations with a vision to stop deaths. Among their goals is to create an accessible range of treatment options, such as virtual health services, clinical care, more treatment centres and pressing for a safe supply as an alternative to Fentanyl-laced drugs found on the street.

On March 2, NDP MP Gord Johns’ bill to decriminalize drug possession for personal use and expand access to crucial harm reduction, treatment and recovery services was being debated in the House of Commons.

Johns noted that the number of deaths from toxic drugs has increased every year over the past six.

“My bill follows the advice of the government’s own expert task force which recommended decriminalization, something that has been called for by public health authorities, police chiefs and major cities,” he said in a statement.

According to the Canadian Drug Coalition, prohibition was meant to reduce illicit use and the perceived associated harms. They say history has proven that it has failed and that prohibition has done more harm than good.

“Evidence clearly demonstrates that it is time for a bold policy shift away from criminalization towards a health and human rights approach,” they stated.

On March 9 the Ministry of Public Safety and Solicitor General and B.C. Coroner’s Service issued a news release calling for a safer drug supply to reduce deaths from illicit drugs, based on the advice of an expert panel appointed by the government.

In their report, BC Coroners Service Death Review Panel: A Review of Illicit Drug Toxicity Deaths, they point to 6,007 deaths from illicit drugs in the province in four years, from summer 2017 to summer 2021. They said the deaths primarily resulted from the increasing toxic and unpredictable drug supply.

Sheila Malcolmson, minister of Mental Health and Addictions, announced that the government is supporting health authorities with $22.6 million to implement a safer supply policy.

“One of the most important ways we can save lives is to separate people from the toxic drug supply,” she said. “We know the toxic drug crisis needs to be tackled from all angles. That’s why our government has made unprecedented investments in mental health and addictions supports across the spectrum of treatment, recovery, and harm reduction. Tragically, this has not been enough.”

Johns said that Bill C-216 would decriminalize simple possession listed in the Controlled Drugs and Substances Act so that users won’t face charges when seeking support. More importantly, it implements a national health-based strategy to manage the risk of overdose by providing access to a safer, regulated drug supply. Bill C-216 was at the second reading stage where it was debated in the House of Commons on March 2.

`Why can’t we do this ourselves?`

Ha-Shilth-Sa caught up to Jackie Dennis. She was proud to report that her son is now one month drug-free. Unfortunately, he hasn’t gotten that in-person appointment with a doctor. Dennis continues to make calls to access support services from her home in Anacla, but is having difficulty coordinating between her son and the doctor.

But through it all, she talks to people in her community. Having her son detox at Anacla, far away from the streets of Port Alberni, helps. But there is a shortage of housing, and Dennis hopes that she will get a larger home so she can help more people suffering from addiction.

Grace Frank has similar ideas for her home near Tofino.

“I have a dream of building something here, where our people can detox and not have to wait to go into treatment,” said Frank. “Why can’t we do this ourselves?”

Jackie’s dream is to go back to school and one day become an alcohol and drug counsellor.

“I want to help make change,” she said.

Grace says that if her son got into treatment, it would be the happiest moment in her life.

“I would jump for joy,” she shared. 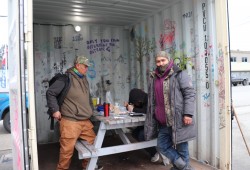 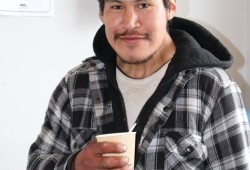