Two people were arrested May 6 and are both charged with First Degree Murder in the March 13, 2018 death of six-year-old Don-Tay Patrick Lucas.

In their public statement issued May 7, the Port Alberni RCMP said they arrested a local 29-year-old man and 28-year-old woman for the murder of six-year-old Dontay Lucas that occurred on March 13, 2018.

“On May 7, 2022 Ms. Rykel Frank (Nee Charleson) and Mitchell Frank were charged with the First Degree Murder of Dontay Lucas. The investigation continues,” stated the RCMP.

Rykel was Dontay’s mother, and Mitchell Frank is her husband, not related to Dontay.

“It’s been a long four years coming, justice has been served…police have made two arrests this morning,” said Patrick Lucas, father of Don-Tay on Friday.

The tragedy unfolded at a townhouse in south Port Alberni on March 13, 2018. The following month Ha-Shilth-Sa reported that, at approximately 9:30 a.m. that morning, the RCMP responded to a report of a child in medical distress at a residence. The boy was transported to hospital, but sadly did not survive.

Police and the BC Coroner’s Service began an investigation that continued over the following two weeks.

“The child’s death is being treated as suspicious and the investigation is ongoing,” stated the Port Alberni RCMP in a news release on March 28, 2018.

But on the fourth anniversary of the bubbly little boy’s death, no arrests had been made. Instead, Patrick Lucas joined friends and family at Victoria Quay in Port Alberni to take part in a candlelight vigil in memory of his son, and to call for justice.

At the vigil, Lucas said he met with RCMP officers in December 2020 and was told the case was almost solved. The last meeting with police was March 2021, when he was told he would have answers in four to six weeks.

“Today is a day that the family and supporters, who've been seeking justice for the late Don-Tay Patrick Lucas, have been waiting for. Four years is too long a time for family and loved ones of a 6-year-old victim of murder to wait for justice. We must push the justice system to work in a way that proves to us all that our lives are valued and cherished. Four years is simply too long,” said NTC Vice-President Mariah Charleson. “My love and strength go to the family who did not sit silent as they continue to push for justice for Don-Tay.”

"It is a real shame that it took four years to bring charges for the death of this young Nuu-chah-nulth child. Families have suffered knowing that no one was taking responsibility for his death,” said NTC President Judith Sayers.  “We at the NTC have never let up in pushing RCMP and Crown counsel and the Attorney General to have charges laid. It was too important not to charge anyone in this precious one’s death.”

Sayers vowed to continue to work with processes, policies and laws so another Nuu-chah-nulth family will not have to wait so long for justice.

“These investigations are difficult for everyone involved, and we understand the length of time that it has taken to get to this point has been challenging for the community,” stated Inspector Eric Rochette, Officer in Charge of the Port Alberni RCMP. 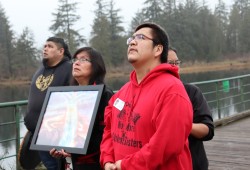