Island Health has reached agreement with Ucluelet Medical Clinic, assuming the lease to head off closure at month’s end and ensuring another 3,000 patients do not lose family doctors.

The move ends months of uncertainty for Ucluelet residents as well as for 1,500 others in outlying coastal communities such as Hitacu and Macoah who rely on the sole clinic in the village. They can consider themselves fortunate in a province where roughly 900,000 residents are not connected to a general physician and primary health care.

“They’re going to take over the lease and the clinic will remain open,” said Dr. McDonald.

Dr. Carrie Marshall, clinic lead and leaseholder, disclosed recently that the clinic has operated at a loss for some time and closure loomed as a possibility at the end of May when the lease expired. The health authority had been meeting with clinic physicians and the Resort Municipality of Ucluelet in search of a solution.

Having a family doctor means access to longitudinal care, McDonald said. Longitudinal care is seamless, providing individuals with ongoing care, maintaining their medical records and co-ordinating referrals to other health care providers. Family doctors, general practitioners, have always performed that critical role in primary care. An estimated 900,000 B.C. residents — one in five — do not have a family physician and the number is rising rapidly as doctors retire or opt out of private practice.

The advent of virtual online health care and Urgent Primary Care Centres is not the same, McDonald said.

“It’s not the same as a family doctor where you have a longitudinal relationship,” she said. A majority of those unattached to a family physician are left scrambling, “and that’s very sad.”

Ucluelet is not any different from hundreds of other smaller communities where recruiting and retaining medical professionals has been a challenge for years. With the general aging of the population, including physicians, and more medical graduates choosing alternatives to family practice, the shortage has reached crisis proportions. Rural residents may feel it more acutely in the absence of options, such as walk-in clinics, but the crisis is universal.

“Even a visit to an emergency room is a major effort. It’s become incredibly challenging for people to get urgent care,” McDonald said.

On the west coast, there may be compounding factors such as housing and a shortage of people willing to work there for a variety of reasons. Graduates are in short supply and have the pick of career choices, McDonald said. The same shortage is affecting FNHA’s recruitment, she said.

A newly founded citizen’s action group maintains there is no shortage of trained medical professionals in the province, only a lack of political will in the face of a health care crisis that is growing steadily worse. B.C. Health Care Matters rallied support last week in front of the B.C. Legislature.

“Everybody in B.C. deserves the opportunity to see a family doctor,” said Camille Currie, who founded the group. “Longitudinal care is the best way to ensure the best health outcomes for people.”

Currie was spurred to action when she and her family lost their doctor in Victoria earlier this year.

“This is a provincewide problem and it’s not localized to the main centres,” she said.

Physician services among First Nations is already 3.3 percent lower than the rest of the population. According to In Plain Sight, the 2020 report on Indigenous-specific racism and discrimination in B.C. health care, access to primary care should be higher based on greater health needs.

“Lower access to physician services may be reflected in a higher burden of disease, or simply reflect that access is insufficient to meet the health needs of the population,” the report states.

The possibility of clinic closure in Ucluelet came up in legislative debate earlier this month when the Liberal health critic Shirley Bond took Health Minister Adrian Dix to task.

“It’s time he gave meaningful answers that give hope to British Columbians and health care workers across this province,” Bond said.

Family doctors are leaving their practices, walk-in clinic wait times are the longest in the country, and doctors and nurses are overwhelmed, she added.

Dix countered that the provincial government is acting, having opened 27 urgent and primary care centres (UPCCs), adding virtual visits and setting up 59 primary care networks, which are local care teams.

“It is extraordinarily effective,” he said.

He also pointed to addressing a fee-for-service system that favours less serious and episodic care. The government is currently negotiating a new contract with private practitioners.

“The honorable members try to pretend that COVID didn’t happen during this time,” Dix said.

Currie maintains that COVID is not the cause, though it has exacerbated the problem. She said the government is unwilling to admit that its prescribed approach to the crisis is not working. Band-Aid measures simply don’t cut it, she said.

“It’s just a huge disconnect,” she said. “The UPCC was quite a wonderful model when it was first described, but they are not the solution to the crisis and are also not addressing current needs.”

“The final step has to be for the health ministry to become open and transparent about the success or failure of the UPCCs.”

Each one costs $2 million to $4 million to set up with annual costs ranging from $3 million to $6 million per centre, she said.

“Are they providing the kind of care needed? If not, should funds allocated for those centres be redistributed to others such as general practice offices?”

B.C. has enough doctors but fewer are choosing private practice over hospitalist positions and specialties because of professional demands, said Camille.

“In B.C., we have 6,800 licensed Family Doctors, but only 3,200 of them are choosing to work in B.C. as family doctors or to practice at all,” Camille said. “Lack of trained individuals is not the cause of this crisis, lack of political will is!”

Alberni Valley residents fare worse than their neighbours on the west coast in terms of physician attachment. Find A Doctor B.C., a web tool that covers most of the southern part of the province, offers no help for valley residents without a doctor. The site gives a link to the “patient attachment mechanism” for Port Alberni, but links instead to the Oceanside Health Connect Registry, which serves only residents of that area.

McDonald sees no ready solution to the crisis.

“I don’t think there is any low-hanging fruit to be had, there are just not enough bodies, not enough trained professionals to do this work,” she said. “We can’t force people to do work they don’t want to do, and we need the specialists.”

Some patients wait as long as 18 months for surgery, she noted.

UPCCs have some advantage in that they are multi-disciplinary and allow staff to provide team care, McDonald said. Administrative support frees up more time for practitioners to focus on patients.

FNHA is opening 15 primary care centres across B.C., two of which are operational. McDonald sees opportunities for collaboration with the mainstream health care system.

B.C. Family Doctors, the economic and political voice of doctors, predicts 40 percent will retire in the next 10 years, which would leave millions more without a family doctor. 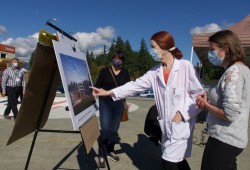 Other Stories in
Health

‘A lot of our people don’t know who to call’: Doctor shortage leaves many elders with no one to rely on

Long-term study delves into the trajectory of health

Aunt fights institutional barriers to get proper care for niece