On June 21 the Tseshaht First Nation and the City of Port Alberni celebrated National Indigenous Peoples’ Day with unveiling of the Wolf Tower at the Harbour Quay. (Denise Titian photos)

Hundreds, if not a thousand or more people, gathered at Harbour Quay this morning to take part in a large-scale celebration hosted by Tseshaht First Nation and the City of Port Alberni. The National Indigenous People’s Day celebration in Port Alberni featured the re-awakening of Tseshaht’s Wolf Ritual Beach, something the First Nation says they were prevented from doing for more than a century.

Modern day Harbour Quay at the foot of Argyle Street in Port Alberni was a large Tseshaht winter village site that they named ƛuukʷatquuʔis (Wolf Ritual Beach, the former Hikwuulh7ath village site), according to Tseshaht historians.

The wolf ceremony, or Tlookwaana, is an important Nuu-chah-nulth ritual. According to Tseshaht, it spiritually prepared men and women for their roles and responsibilities to take care of their community.

But the village site was taken from the Tseshaht for the purposes of settler occupation and, as a result, they were prevented from performing our Wolf Ritual at ƛuukʷatquuʔis, according to a May 5 press release from the First Nation.

“It remains a sacred part of our Aboriginal title territories and today we have much to celebrate,” stated the
First Nation.

The City of Port Alberni has been working with Tseshaht as they define what reconciliation will look like for them.

“Walking together is an expression of meaningful action and ongoing commitment to reconciliation efforts,” stated the First Nation. “We look forward to celebrating Indigenous culture and all cultures that make up Port Alberni and surrounding areas.”

The event kicked off with a free breakfast followed by the welcoming of guest canoes. A Tseshaht chaputs (canoe) carrying their Ha’wiih was the first to arrive. They stood on the float to officially welcome the NTC Usma canoe, followed by canoes from Ahousaht and Huu-ay-aht.

The last canoe to arrive carried two sets of grandparents and their grandchildren, who paddled all the way from Ahousaht, resting at Nettle Island for the night. Tseshaht Ha’wiih told them they were honored that they accepted the invitation to paddle ashore for this event.

Following the arrival of the canoes, the wolf dancers were revealed and were escorted by Ha’wiih and drummers up to the area around the wolf tower, where the welcoming ceremonies would take place. There were two crackling fires at the top of the ramp – one to warm up by and the other to barbecue sockeye salmon. Eagle down lazily floated through the air as the crowd gathered around the hosts.

Speaking on behalf of the Tseshaht Ha’wiih, Robert Watts explained to the crowd the importance of tlookwanna (wolves) in Nuu-chah-nulth culture.

Tseshaht speaker Trevor Little noted that his people have gone through so much in their history.

“It was 1884 when the first residential school opened – people talk about that but they don’t talk about what happened to us outside of those places,” he noted.

He went on to say that he is grateful people are now learning the true history and are accepting it.

“When we come together like this we feel the strength and the love – good work has been done over the years,” said Little.

“They welcome you back to ƛuukʷatquuʔis and they thank you for helping us celebrate ƛuukʷatquuʔis for the first time in over 100 years,” said Watts.

Martin Watts acknowledged all of the Nuu-chah-nulth Ha’wiih who honoured Tseshaht’s invitation to spend the day celebrating with them. There was representation from Ka:'yu:'k't'h'/Che:k'tles7et'h', Hesquiaht, Ahousaht, Huu-ay-aht, Hupacasath, Ehattesaht, Ditidaht, Tla-o-qui-aht and Uchucklesaht.

Elected Tseshaht Chief Ken Watts also welcomed the people and acknowledged the elders who were there. He said that when he thinks of leaders past, the ones who are the elders now, he thinks of them as veterans.

“They are the ones who fought so we could stand here today,” said Watts, adding that there was a time when they were not allowed to feast or potlatch.

Thanks to the efforts of past Indigenous leaders, culture is now being learned not only by children in schools, but also adults who are entering into language programs as they fight to keep ancestral dialects alive.

Watts also acknowledged Tseshaht artist Willard Gallic Jr. who designed the art that was installed on the tower at Harbour Quay.

He thanked Tim Pley of the City of Port Alberni for his assistance in the redesign of the tower. To the City Council, he said, “Thank you for helping bring us back to our home…Tseshaht has over 1,200 people and we welcome you.”

The morning concluded with the unveiling of the newly designed tower, now embellished with Tseshaht images, and topped by twin wolf heads.

Guests were invited to stay for barbecue salmon lunch and to watch song and dance performances by Tseshaht and their invited guests. 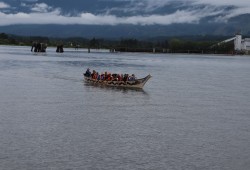 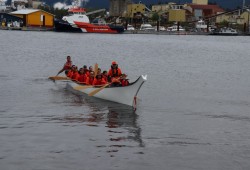 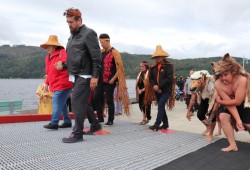 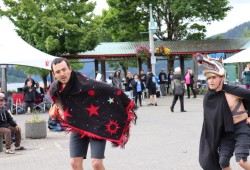 Other Stories in
Culture