Booms are placed around a sinking vessel in the Alberni Inlet on July 13. (Western Canada Marine Response Corporation photos)

Prime Minister Justin Trudeau announced the next phase of Canada’s Oceans Protection Plan on July 19. It comes with a commitment to add $2 billion over nine years.

This builds on the $1.5 billion that’s been directed towards the program, which was launched in 2016.

Established to strengthen the protection of Canada’s coasts and wildlife, the Oceans Protection Plan is being labelled as a “Canadian success story” by the prime minister’s office (PMO).

“When Indigenous peoples, industry, communities, academia, and government work together to protect our environment, grow our economy, and support good jobs across the country, we deliver real results,” a release from the PMO read.

“I'm very excited about that,” she said.

But, she said, “I also want to see that that money is actually being delivered and being used.”

“We're in a climate crisis,” she said. “We have so many areas that need that funding allocated immediately. The fact that we're carrying funds is concerning to me.”

The Oceans Protection Plan focuses on mitigating and responding to pollution, said Barron.

“I would like to see more happening on the prevention side,” she said.

For instance, Barron noted it should be more difficult for boat owners to abandon their vessels in the ocean.

“The incentives to actually take care of the boat properly are significantly lower than it is to just abandon it,” she said.

According to the federal government, the success of Canada’s Oceans Protection Plan is being measured through increased collaboration with Indigenous peoples and coastal communities, as well as the passing of new legislation.

This includes the Wrecked, Abandoned or Hazardous Vessels Act (WAHVA), which became law in 2019 and made it illegal to abandon a vessel in Canadian waters.

And yet, the Canadian Coast Guard (CCG) recently watched a fishing vessel sink in the Alberni Inlet with 500 litres of diesel onboard in the middle of a salmon migratory route.

A 34-foot gillnetter that was actively fishing began to sink after getting caught on rocks as the tide was receding in the morning on July 11.

The Canadian Coast Guard (CCG) received a report around 3:15 a.m.

CCG’s Bamfield lifeboat station crew were the first on the scene and observed a “small non-recoverable light sheen about four cables south of the vessel, but no pollution was observed around the vessel itself,” said Michelle Imbeau, spokesperson for the CCG.

Western Canada Marine Response Corporation (WCMRC) was mobilized to work alongside the Coast Guard to respond to the incident near Hocking Point.

According to Michael Lowry, WCMRC senior communications manager, a boom was positioned around the vessel to contain the spill and sorbent pads were placed within the containment area to absorb diesel that had leaked out.

At the time, the coast guard said the vessel owner had hired a contractor to salvage the vessel on July 12.

WCMRC Indigenous Relations Advisor Jonathan Wray said that days later, the boat’s owner and the salvage company that was hired had gone “completely dark” and were not returning any calls.

On July 13, the CCG assured that it was working towards a salvage contract, but did not have a salvage date.

“As the vessel owner has failed to take action, the CCG is making plans to have the vessel removed from the marine environment,” the CCG said on July 13.

The vessel is now believed to be 120 feet underwater and the CCG said “there are no plans to raise, salvage or remove the vessel.”

This is based on the “diminished and minimal threat to the marine environment,” the CCG said.

According to the Coast Guard, the containment and recovery of diesel on the water was “effective and no oil impacted the shoreline.”

The boom was removed in consultation with Tseshaht First Nation after there was no observable hydrocarbons on the water for seven days, said the CCG.

“A comprehensive hazard assessment under the authorities granted to the Coast Guard by the Wrecked Abandoned and Hazardous Vessels Act is currently underway and the results of the assessment will determine next steps,” according the CCG.

Tseshaht First Nation Elected Chief Ken Watts said he hoped the boat would have been dealt with and pulled out of the marine environment “as soon as possible.”

While Watts said the Coast Guard and WCMRC were quick to respond to the incident and recovered the upwelling of diesel using sorbent pads, the vessel should have been removed “immediately.”

“It shows a gap in terms of how things are dealt with and who deals with them,” he said. “Get it done, and figure out who pays for it later. You can't put a price tag on the environment.”

A release from the PMO maintained that the expanded Oceans Protection Plan will help make further progress to improve the “efficiency, safety and sustainability of Canada’s marine supply chains and mitigate their impacts on the environment, including by advancing research on marine pollution, ecosystems, and wildlife.”

In October 2021, 109 shipping containers were knocked from cargo ship Zim Kingston while it was travelling through rough seas off the west coast of Vancouver Island. Only four were recovered.

“It’s a horrible example of the lack of prevention and planning and work happening with local and Indigenous communities,” said Barron.

Rather than responding by integrating local communities and First Nations, Barron said the ship’s owner hired contractors who were not familiar with the area.

“What ends up happening is that there’s a delayed response time,” said Barron.

The Zim Kingston container spill is an example of where there are gaps, she said.

“If we had gold in one of these containers that had sunk, I can assure you we’d figure out pretty quickly where it is and how to get it out,” Barron added.

There needs to be an “integrated response plan, similar to that of an oil spill,” she said.

“We’re seeing more and more containers spilling into the ocean and they have horrible detrimental impacts on our ecosystems,” Barron said. “There's a lot of work that needs to be done within different areas of the federal government, but also alongside all levels of government. In particular, those who are local and on the ground in our coastal communities.”

According to the PMO, the Oceans Protection Plan is a “whole-of-government effort,” with responsibility shared between Transport Canada, Fisheries and Oceans Canada, the Canadian Coast Guard, Environment and Climate Change Canada, Natural Resources Canada, and Health Canada, with support from Public Services and Procurement Canada and Global Affairs Canada.

Joyce Murray, Minister of Fisheries, Oceans and the Canadian Coast Guard, maintained in a release that whether it’s responding to marine emergencies, or restoring aquatic ecosystems, the government will be “working in partnership with Indigenous peoples and coastal communities to protect Canada’s mariners, waterways, and shorelines now, and for the generations to come.”

Barron said the plan doesn’t go far enough and that prevention pieces need to be put into place.

“We need to think holistically,” she said. "And stop committing to bandage solutions and instead focus on preventing disasters and pollution in the oceans from starting in the first place.” 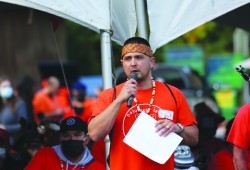 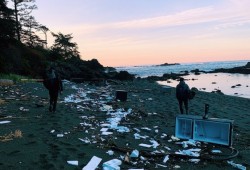