Green Coast Dispensary spent August 6 celebrating a key date in the history of their business. The date saw the business’s ownership and management throw a free barbecue event for the public to celebrate the anniversary of moving to their River Road location.

Green Coast manager Graham Sayers says the event felt like a great way to thank the community and give back.

“It's just nice way to give back to the community and let them know that they're appreciated and that it's them that make our business succeed,” explained Sayers. “We just wanted to do something nice on that day. And it happened to be on a Saturday, which was perfect for us.”

He adds that Green Coast Dispensary would like to barbecue to be an annual event. Sayers says the company would like to do more in the community as well, differentiating themselves from just being another store in the area.

The company itself is owned by Rudy Watts of the Tseshaht First Nation and Dwight Dockendorff, who is of Métis ancestry. Sayers is Hupacasath and manages Green Coast Dispensary, which is now located on Hupacasath land. According to Sayers, the sense of coming together that comes with this business is a really important factor at Green Coast Dispensary and it reflects in all of the different people involved.

“Dwight and Rudy gave the Hupacasath youth group run by Carolina $5,000 for the youth groups at the start of the summer,” outlined Sayers, adding that they plan to improve a campground. “And that's part of our plan is to keep on doing things within the community to kind of show our support, and our appreciation, and really show that we're here.”

According to Sayers, Tatoosh has been running the Hupacasath youth group for years, to the point where kids she’s raised have their own kids in the group now. A group that important in the community felt like a very important place for Green Coast’s ownership and management to help out.

Running a business that brings the people together is an essential pillar in Green Coast’s structure, especially in being owned by Rudy Watts, who is Tseshaht and located on the Hupacasath reserve.

“It makes me proud to be able to start an Indigenous-owned business on traditional lands,” said Watts.

Sayers echoed the sentiment, saying he strongly believes in the idea of having everyone work together on traditional lands and watching it grow.

On the business side of things, Sayers says Green Coast Dispensary has experienced steady growth since their move to River Road.

“We had lost our original location about three years ago and it took a couple of years for us to find something that would really fit well,” said Sayers. “That's how we ended up coming to my band, the Hupacasath band. We worked with them for about six months on opening up the dispensary here on traditional territory.”

Since the move, Green Coast has seen their growth come from word of mouth alone and they continue to bring in customers of all demographics. A major driving force of that growth has been the growth of the marijuana industry.

According to Sayers, all kinds of people come into the store for different reasons, ranging from physical health to mental health and much more. He adds that after they help people out at Green Coast, these customers really spread the word.

“They're educating themselves and then they're going out and educating their friends and their family members,” he explained. “And I mean, some of the stuff that's coming out right now with CBD and the benefits that people are feeling from it, it’s giving instant benefits to people that are feeling anxiety or having problems with sleep.”

Green Coast Dispensary’s growth is continuing throughout Vancouver Island as well. They’ve expanded by opening up a second store with the Qualicum First Nation, located on Fisheries Road in Qualicum Beach. Sayers says the new location has done really well through their first month open, and he adds that this is something Green Coast’s ownership and management group would like to continue doing in different communities that would welcome this opportunity. 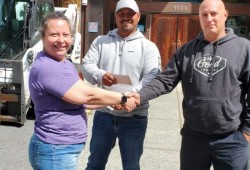 Other Stories in
Business

Labour shortages felt in communities across the west coast