As many as 30 units could be installed at the site on lower 4th Avenue, which was purchased by the City of Port Alberni to provide housing for the homeless. At least 15 are planned to be ready this fall. (Denise Titian photo)

Plans to build a tiny house village on lower 4th Avenue have been delayed due to planning and approval processes, according to Port Alberni Friendship Center Executive Director Cyndi Stevens. There have also been unforeseen cost overruns that are concerning to the PAFC executive director.

The City of Port Alberni announced that it is moving ahead with plans to provide better homes to people living in run-down trailers on 4th Avenue, known locally as “The Ghetto”. They partnered with BC Housing and the Port Alberni Friendship Centre to provide a safer housing alternative.

The illegal trailer park on lower 4th Avenue spung up after one of the two Wintergreen apartment buildings burnt down in the summer of 2013. Randy Brown subsequently purchased the property and began moving old recreational vehicles onto the vacant property, creating a RV park for the city’s hard to house population.

Since 2018 Brown has been repeatedly ticketed by the city to the tune of $120,000 for building and fire code infractions. He was slapped with a remediation order in 2020 and ordered to remove the trailers but he refuses to pay the fines and hasn’t removed the RVs.

He has said that he charges $500 per month for a single person renting a dilapidated trailer or $375 per person if there are more people renting a single unit. He has argued that these trailers provide a roof over the heads of people that would otherwise be sleeping on park benches or in the streets.

The City of Port Alberni purchased three vacant lots adjacent to the Wintergreen Apartment property to be leased to the Port Alberni Friendship Center at a nominal cost of $1. In partnership with BC Housing, the city and PAFC plan to build a tiny home village complete with security and support systems for marginalized people. The Housing Task Force, which includes Tseshaht, Hupacasath, the Nuu-chah-nulth Tribal Council and other local agencies, are also involved in the project.

In June 2022, the PAFC issued a statement saying, “The creation of this temporary housing development has been a combination of efforts in response to providing safe, alternative housing to several individuals unable to access safe, affordable housing who are currently residing in unsafe conditions and or living rough.”

The tiny homes, although small, would deliver secure, dry sleeping pods with electricity, a mini fridge, desk and chair. The tenants will have access to restrooms, showers, food, Wi-Fi and support services, including recovery referrals.

Earlier this summer the PAFC reported that they secured funding for 13 tiny house units and hoped to find funds for up to 30 units. They had hoped to begin moving tenants in by the end of summer or early fall, but there have been bumps in the road.

“We had hoped to have it done by Oct. 1 but that’s not happening,” Stevens reported.

She said there’s been some unforeseen costs having to do with code requirements and site planning.

“We didn’t anticipate some of the lease requirements and are working with the city to come to an agreement,” she added.

The original plan was to build 30 tiny homes but added expenses, according to Stevens, may raise the price tag of each unit by $5,000. She is not sure there will be enough to cover the 15 houses the PAFC committed to - let alone the 15 other units they had hoped to find funding partners for.

“The Friendship Center has no money to pay for those extra expenses,” said Stevens.

“Costs have gone up and there’s nobody else coming to the table with funding,” she said, adding that they are seeking contributions.

Port Alberni Mayor Sharie Minions stated that the city will contribute $140,000 to the project for utilities, fencing and security.

PAFC had been prepping the lot for construction and have begun purchasing supplies needed for the tiny homes.

The tiny houses will be pre-built on the mainland, according to PAFC specs. They will be assembled on site once city hall approves drawings for the tiny house village.

“The tiny house panels were to be here Aug. 29 but we had to hire an architect to draw a site plan, that caused delays,” Stevens said.

There will be a meeting with the city on Sept. 26, where Stevens will find out whether the new plans will be approved by the local government.

“Ideally, the village could open mid-October, but more likely it will be Nov. 1, 2022,” said Stevens. 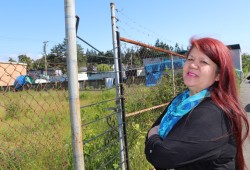