The Sproat Lake Elementary School is being cleared 19 after closing, with hopes for residential development in its place. (James Paracy photos)

Since September of 2003, Sproat Lake Elementary School has been closed to the public. Now, in September of 2022, progress is officially being made to remove the rapidly deteriorating and graffiti-covered building from the land it sits on.

Through the benefit of federal funding, Tseshaht First Nation Chief Councillor Ken Watts is fairly excited for the opportunity that comes with this major step in his community. Tearing down the decrepit building opens up the opportunity to use the land for residential or commercial use. Watts says the decision is closer to being made on the matter after conducting a study.

“We've received federal funding to explore economic opportunities there and done a ton of various studies, feasibility studies and other matters on the land with the intent of doing some type of residential development there - whether it be for community members or out-of-market housing,” he explained.

Offering Tseshaht members housing on the land would have one obstacle to get around first: getting the property rezoned. The land Sproat Lake School sits on is currently part of the Alberni Clayoquot Regional District. Watts and the Tseshaht First Nation have reached out to the Regional District to see if rezoning the land to reserve land would be possible, and they’ve been receptive so far.

However, that presents a further obstacle to overcome according to Watts.

“The city doesn't usually service off reserve property out of the city limits, and that's what that is, that's not in the city limits [or] within the regional district limits,” outlined Watts. “So, we're worried now that we can't run water and sewer there. We're now discussing looking at adding it to reserve and still proceeding with some type of housing development there, and it's clear housing is needed everywhere.”

Although a city-serviced sewer system may not be an option for the site at this point, other options are still possible. The former school’s land sits just past the Tseshaht reserve’s water and sewer limits, but even though it isn’t something that’s usually done, the nearby Sproat Lake Volunteer Fire Hall was connected to water and sewer years ago. Some nearby residential areas closer to Sproat Lake run their sewer systems off of well-based water; it has yet to be seen if resident developments could follow suit. Obstacles aside, Watts is ready to make something happen on the Sproat Lake School site.

“I'm pretty certain that we'll be doing some type of housing development and then we'll kind of go from there,” he added.

The project itself provides a major benefit to the Tseshaht First Nation after over 20 years of owning the property. The major issue holding back the demolition of Sproat Lake School for this long has been funding. The building is full of asbestos and lead paint, which makes for an increasingly more expensive removal and demolition job, one that wasn’t easily affordable until the federal funding mentioned by Chief Councillor Watts was granted. The federal government’s funding comes with a training program through the project. According to Watts, the training program will lead to several jobs for Tseshaht members, who will gain skills to use going forward.

“I think there's eight Nuu-Chah-Nulth or Indigenous people that are involved in the training program right now,” said Watts. “We're able to tap into that and some economic funding and other areas to really make it a reality. We had to be creative and work with the government to find ways to make it a reality. So, I'm really excited to be seeing the members, both Tseshaht and not, being trained and knowing there's great employment opportunities for them after this. It's exciting. It's a new industry, but at the same time we're tearing down a building that's been an eyesore for a decade.”

Demolition of Sproat Lake School began on September 12. The project is run by Pro Pacific Hazmat in collaboration with an array of other companies and contractors. The demolition is expected to carry on Monday through Friday until the end of 2022. 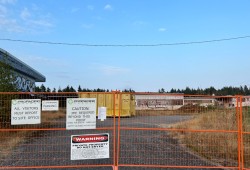 Other Stories in
Housing