Chinook flood through the Stamp River in September, part of a run that proved to be better than expected for the species. (Eric Plummer photos)

In early October Vancouver Island reached a drought Level 4 which impacted wildlife across the coast. After a mass salmon die off in Bella Bella, concern grew regarding drought and a delayed salmon spawning season.

“With respect to this drought, it delayed a lot of things,” said Rolston.

“We've had some rain but we haven't had enough, really, for things to recharge all the systems yet, so the smaller streams are the ones that really bear the brunt of low water,” said Graham Murrell, fisheries manager at Hupacasath. “Instead of a peak it kind of blunted the peak of the returns and kind of spread them out throughout the time.”

In the Stamp River, which leads to Great Central, the water level is controlled by a dam at the lake, which means they can help maintain minimum flows making Stamp River less of a concern for the salmon runs, said Murrell.

“It's definitely changed some of the behavior of the fish. There was…kind of a slower return,” he said.

Because of the lack of rainfall, Murrell saw pretty consistent water levels.

“Usually, with Chinook especially, you’ll see when the rains come, there'll be a big flood of fish up the river,” he noted.

Murrell said that juveniles saw larger impacts with the creeks being de-watered.

“They'd be staying in the cold pools and the creeks, but many of those dried up, so we would have lost some juveniles for sure,” he said.

Rolston said that the McCoy Lake watershed was significantly impacted by the drought, as there was too much water withdrawal from the system.

“The adults weren't able to get up and spawn until probably about a week, week and a half ago,” he added.

Rolston said that Chinook and Sockeye had much better runs than predicted this year with Sockeye being double what had been forecast.

“They got up into the lake early when the watershed had cooler and higher water conditions this year, which was quite different than last year,” said Rolston.

“The Sockeye, I noticed, about a week and a half, two weeks ago were starting to spawn at the bottom of where Taylor arm empties into Sproat Lake. And that's about probably three weeks late,” continued Rolston. “They may or may not have been impacted.”

“There's definitely going to be some impacts but being able to tell what those impacts are is always a challenge,” said Rolston.

He said there currently isn’t an intensive survey to understand the impacts of juvenile and salmon year to year.

“It's likely that if there was any sort of a long delay, that probably would reduce some of the potential egg deposition within some of those areas,” said Rolston. “[And] less water means there's more success for predators.”

Murrell said that it was an interesting year, but overall is pleased with the returns.

“Every year it seems to be getting a little bit more intense. These droughts and extreme weather conditions,” said Rolston. “That was predicted some years back, with a lot of the fisheries people have been talking about the impacts to fisheries and fish for 20-plus years on global warming.” 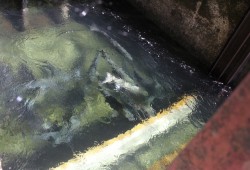 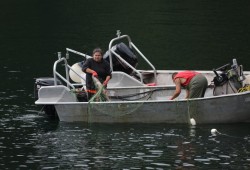