Participants in the last Trauma and Resiliency workshop hosted by Tla-o-qui-aht. Chris Seitcher’s daughter helped create the poster and wrote, “we see you, you’re not alone.” Regular gatherings were scheduled to start in November at Tin Wis for those who were traditionally accepted in Nuu-chah-nulth tribes. These gathering have been postponed to a later date that is yet to be announced. (Submitted photo)

The Tla-o-qui-aht First Nation is hosting the upcoming Trauma and Resiliency, Two-spirit/LGBTQ+/Indigiqueer workshop to address the compounded issues that members of the community face.

Diane Labelle, a researcher and trainer for two-spirit/LGBTQ+ issues and one of the facilitators for the workshop, said, “Colonization has really done a big number on us. I mean, residential schools, new ideas, new values, that have led us to move away from our central values, such as the inclusiveness of people.”

Norine Messer, Tla-o-qui-aht’s capacity building coordinator, said that traditionally two-spirit folks were welcomed and respected in Nuu-chah-nulth communities. The social norms that lack acceptance are accompanied with colonization and are what have created compounded oppression that LGBTQ+, two-spirited and Indigiqueer people face.

“What we're doing is part of what's called community intervention, meaning that we are addressing the issue of LGBTQ+ people living in the community, with community members at many different levels,” said Labelle.

According to Egale, Canada’s leading organization for 2SLGBTQI, Indigenous LGBTQ+ are more vulnerable to suicide.

“We just want to support that change so people understand…and feel that they belong and have a place and that we need them,” said Messer. “There's love in the community and acceptance.”

Labelle said that a workshop like this will help two-spirit/LGBTQ+/Indigiqueer individuals identify where some of the struggles they’ve faced come from.

“For the individuals who are two-spirited, [the goal of the workshop] is to provide a safe space to talk about issues, to have a sense of validation for who they are as members of the community and validating also their experiences,” she said.

“The idea of being able to dialogue openly about this is the beginning of the whole process of healing from these things that we've lived with,” continued Labelle, “and to see how identity as a whole has been affected by colonization.”

The workshop will also help community members and workers identify some of these issues and safe practices so they have tools for intervention, said Labelle.

Labelle said for the staff, the goal is to help them better understand how things have progressed to how they are currently.

“And [what it means] to bring in our relatives back into the community,” said Labelle. “These individuals who have either been excluded from the community or have excluded themselves.”

“We're just trying to look at…what causes that trauma in individuals and how we can address it and provide interventions as allies and community members and staff and family members,” said Messer.

At the very center of the circle is culture, values, teachings, ceremony, medicine, and children. Next the mothers, then grandmothers, then the men, said Seitcher. “Right in between, in that circle, are the Two-Spirited/LGBTQ+,” said Seitcher.

“The overall goal is to rebuild the circle. And to welcome our two-spirit friends and relatives into the circle to take their rightful place,” said Anita Charleson-Touchie, a family counselor. “To let them know that we see, we see you, [and] that they're not alone.”

“The importance of [the workshop] is creating connections. Not only to other participants, but they'll see who in their community they can turn to for support,” added Charleson-Touchie.

Labelle said that this workshop is just the beginning of the work that needs to be done to ensure two-spirit/LGBTQ+/Indigiqueer have a sense of belonging in the community.

Charleson-Touchie reflects on the poster of a rainbow flag made in the previous Trauma and Resiliency workshop.

“That really comes back to the Nuu-chah-nulth values of love one another, help one another, respect one another, be kind, [and] that everybody has a place to belong,” she said. 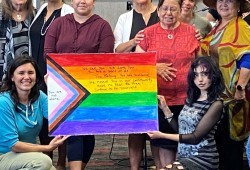