An in-person Feed the People event has not been held since 2019, due to COVID-19 restrictions, but the gathering returns to the Alberni Athletic Hall this year. The gathering takes place Dec. 14, with a bus running from the Port Alberni Friendship Centre to the Athletic Hall. (Eric Plummer photo)

It’s been three years since the annual Christmas luncheon held by Teechuktl Mental Health Services has been able to happen in person, and preparations are now underway to make sure Feed the People goes off without a hitch.

Teechuktl holds public meals twice yearly, once in the summer and once in the winter, a tradition for the past 12 years after being started by the late Ray Seitcher. Irene Robinson of the Teechuktl Mental Health Services has been involved in the organizing process for the past four years.

“He decided to have a Turkey dinner with all the trimmings,” explained Robinson. “His goal was low-income people and homeless, but anyone's allowed to attend. When he started it, it was small and he wanted everything done by donation because he wanted the people that he was welcoming in, he wanted them to know that we weren't just doing it because it’s a job. He wanted them to know that we really worried about them and cared for them and loved them, and that there's always someone there caring for them.”

When she started working on the event, it was hosted in a small church with 120-150 people attending. This year, they are planning on having attendance closer to 500.

Homelessness has been a growing issue throughout the province and Vancouver Island, and Port Alberni is no exception. As of a 2021 count performed by BC Housing, there were 125 homeless people in the city. Sixty five per cent of those people identified themselves as being Indigenous, despite the fact that, as of the 2016 census, the Aboriginal population of Port Alberni was only 17 per cent.

It has not been easy to run the event for the last few years due to the COVID-19 pandemic. Year one, an in-person gathering was not able to happen, and instead Teechuktl staff delivered meals. In 2021 caterers were hired, and volunteers delivered meals to those who needed them.

But not all was negative for those years, explains Robinson.

“That one year we had a lot of people step up,” she said. “We went to a meeting, I can't remember what the name of the committee was, but it was all representatives from all the bands were there and one guy there challenged the others. He put in $500 of his own money and challenged the others.”

The others answered, and they ended up with more donations than they expected. It was not just money either, as the Huu-ay-aht First Nations ended up donating enough frozen, canned, and smoked fish that they could make food baskets to go out to people as well. But all this left a question, what to do with the extra money?

“[Someone] said, ‘Well, why don't we get presents for the kids?’ So that's what we did,” said Robinson. “We got the names of people we were delivering to, who had kids and how old they were, and they went out and bought gifts and wrapped them.”

The generosity of previous years has been carried onto this one as well. The Alberni Athletic Hall has donated the use of their centre for the event at no cost, and Teechuktl Mental Health Services received enough donations that they have been able to buy all of the food necessary. The community has been stepping up in other ways as well, said Robinson.

“We've been working with Haahuupayak,” she said. “The students up there have a unit on community and the teachers wanted them to see what community looked like. So they've been volunteering, coming up to Feed the People...we ask for gently used coats and boots and clothing, just anything people might need. And the Haahuupayak students organize the [clothing] table.”

Those same students also help with decorating the tables and serving water, and will be holding a bake sale on November 30, with all funds raised going to the event. The Teechuktl Mental Health Services has also reached out to local high schools, as students need a set amount of volunteer hours to graduate.

“We reached out to [the Nuu-Chah-Nulth education team] at the high school and they're looking at Grade 12 Nuu-Chah-Nulth students who need volunteer hours to graduate. And if they're available and want to come then we'll keep track of their hours and hand those in,” said Robinson.

Not everything is accounted for yet though.

“The food has been bought, but we really need socks, gloves, hats, like touques. Because people who are homeless, this is what they need to try to stay warm. We also need door prizes and door prizes can be anything,” she explained.

Any donations can be brought to the Port Alberni Teechuktl Mental Health Service office, in the old Redford School building at 4841 Redford Street.

Feed the People will be taking place on Wednesday, December 14, with doors opening at 11:30 in the morning. A bus will be available from the Port Alberni Friendship Centre to the Athletic Hall beginning at 10:30 on. If it is a cold day, there will be an area inside in which people can wait for the bus.

While organizing an event like this is not always easy, Robinson says that the sense of community and the appreciation from those who need it makes it all worth it.

“These people, they struggle all year. And they're just so happy that they're getting together and being fed and talking to their friends. Just the smiles and the happiness that is at the event, it makes it all worthwhile.” 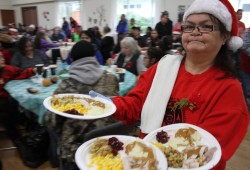