A marine mammal expert with Fisheries and Oceans Canada says that this year’s number of humpback carcasses found on the West Coast is still within the normal range. Pictured is a dead humpback found in Cape Beale on the west coast of Vancouver Island. (Submitted photo)

A fourth dead humpback whale has washed up on the shores of Haida Gwaii. The sad discovery was made Nov. 20.

According Paul Cottrell, a marine mammal coordinator for DFO, the remains are in an advanced state of decomposition and may be the same whale spotted floating offshore from Prince Rupert on Oct. 12.

Cottrell said photographs were taken of the Rupert whale carcass but were not clear enough to confirm whether it is the same whale.

Cottrell the first whale was discovered Aug. 4th and was a humpback. The other three dead humpback whales were discovered from October 23 to November 20 on Haida Gwaii and Vancouver Island beaches.

On Oct. 23 a dead, female humpback whale was found on Malcolm Island near Alert Bay. It was determined that whale died of blunt force trauma, likely a boat strike.

On Nov. 5, a young male humpback whale was found on a Haida Gwaii beach at Masset Inlet. Its death was also determined to be caused by blunt force trauma.

On Nov. 20 a badly decomposed humpback whale was discovered on Haida Gwaii at East Beach.

Cottrell says two of the whales show blunt force trauma consistent with vessel strikes. All the whale carcasses have had measurements and tissue samples taken and will be necropsied.

Fisheries and Oceans Canada are waiting on test results and a report to come back from Dr. Stephen Raverty, a board-certified veterinary pathologist.

“He’s a world authority, we’re lucky to have him here on the West Coast,” said Cottrell.

He said both grey and humpback populations have rebounded since the commercial whale hunting era ended. However, there was an unusual mortality event for grey whales beginning in 2019.

While the specific cause is not known, Cottrell says it could be related to changes in the Bering Sea brought on by global warming that may be affecting food supply for grey whales.

“Humpback whales have a healthy population and their movement back to inshore waters is a good sign,” said Cottrell.

Whales, he said, chase food, so this means they are finding forage fish and krill inshore.

“We’re seeing lots of calves, too,” he added.

He called the cluster of humpback whale deaths in the past few weeks a pulse.

“It’s still within the normal range,” he said, adding that they normally see five whale carcasses a year. “We’re at eight and hope it’s just a blip.”

“That’s why necropsies are so important – we can watch for trends and see if there’s anything we can do to mitigate,” added Cottrell.

For that reason, it is important to report whale carcasses as soon as possible. Fresh carcasses offer more information, he said.

Cottrell said it’s good to see the plastics and ghost gear clean-up programs that are out there. Presently, there is an entangled humpback whale at Quatsino Sound on northwestern Vancouver Island that locals and fisheries officials are trying to locate and rescue.

“It has a buoy, some line and either crab or prawn gear,” said Cottrell.

Quatsino Sound locals have been searching for the whale. DFO officials said they would go out soon with the weather improving, hoping to find and free the whale of entanglement before it’s too late. 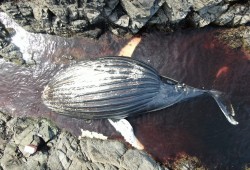