"I am going to go the distance and finish what I started," says Tim Paul as he works on the project at Port Alberni’s waterfront. (Denise Titian photo)

The Language Revitalization pole, commissioned by the First Nation Education Foundation, will be completed as a gift to the people, according to Hesquiaht master carver and elder Tim Paul.

Original plans for the pole, which was to be a celebration of Aboriginal culture during the 2019 Year of Indigenous Languages, was that it would be raised on the grounds of the University of Victoria. But a series of setbacks forced a change in plans.

The 800-year-old dead fall log was a gift from Huu-ay-aht First Nations. The log was trucked from its resting place near Bamfield to the waterfront in Port Alberni, where master carve Tim Paul and his team got to work designing a 70-foot pole that will be called hayu?akqin ?aayuushyums, or our ten relatives.

But the design had to be modified after a closer look at the condition of the innermost parts of the log, which had to be hollowed out due to rot. Another problem was a shortfall in funding.

The year 2019 was an extremely difficult one for Paul with the loss of his brother in February. The following month his wife Monica was injured; she passed away last October. Paul’s mother passed away less than three weeks later.

After taking some much-needed time to mourn his losses, Paul and his team got back to work on a voluntary basis.

“I am going to go the distance and finish what I started,” he said.

Paul said it was important to bring the teaching of the grandmothers forward.

“The art of giving is the greatest gift in the world and we’re doing it,” said Paul.

The pole, with its 10 relatives, speaks to the teachings and values in Nuu-chah-nulth culture. There is Sky Chief who oversees all. Other imagery depicted on the pole are sun, wind, thunderbird, Mountain Chief, lakes, land and Sea Chief.

“In our culture we are relative to nature; look at what’s happening in the world,” said Paul.

He pointed out that there is climate change happening and lessened access to the food resources that Nuu-chah-nulth once enjoyed in abundance. Through the stories on the pole, Paul said he hopes to bring the teachings of the grandmothers forward.

“I want to leave a good library of culture for our young people,” said Paul.

He said there is rot they must deal with and they hope to make the finish as clean as possible.

“We’re looking more at repairs because it’s so fractured,” said Paul of the cedar log.

He credits his team, Josh Prescott, Peter Grant and Stan Lucas for their generous contributions to the project.

“Stan, he never stops working,” said Paul of his relative.

While the manpower and creative energy is given voluntarily, materials and supplies are running low and there are no funds for that. Paul mentioned that a Hupacasath elder visited the carving site on the weekend and said he would try to round up some donations for the materials.

But Paul is not worried about payment for his work.

“I’d rather people come to talk to us and look at the pole – it will stand in Port Alberni because we will get it finished,” he vowed.

The pole, said Paul, will be a representation of Nuu-chah-nulth cultural teachings, art and history.

Paul said he wants the pole to be a positive thing; something to counteract all the unproper things that Nuu-chah-nulth ancestors endured.

“We’re going into a new year and I want to leave something positive,” he said. “I do this art to make people feel good and to make our people happy.”

Paul estimates the pole will be complete in the spring of 2021, depending on the weather. 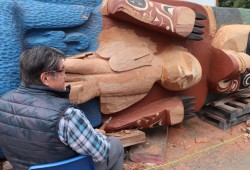 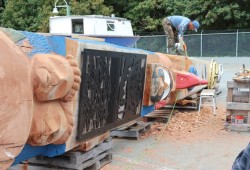 ‘It’s alive now and we can talk to it’: Pole’s name references first woman

As its eyes look east toward the rising sun this autumn, the carver behind a totem pole recently…

Pole stands as mother for lost children to come home