RoseAnne Archibald, national chief of the Assembly of First Nations, met with Huu-ay-aht, Hupacasath, Ahousaht and Tseshaht last week, developing relationships in the first weeks of her term. Here she is pictured during a welcome provided by the Tseshaht First Nation. (Eric Plummer photos)

Two weeks into her term as national chief of the Assembly of First Nations, RoseAnne Archibald has shown an active interest in Nuu-chah-nulth communities with three days of visits July 22-24.

Archibald was elected to head the national advocacy organization in July 8, becoming the first woman to hold the high-profile role. A member of the Taykwa Tagamou Nation from Ontario, Archibald first heard from Nuu-chah-nulth leaders as she sought the AFN position.

“I was invited by a number of the chiefs during the campaign,” she said, after being treated to a formal cultural welcome by the Tseshaht First Nation on July 24. She also met with the Huu-ay-aht and Hupacasath on Thursday July 22 in Port Alberni, followed by a visit to Ahousaht the following day. “I thought I would try and see as many communities on the Island as possible, so we reached out to Judith Sayers, and she was able to arrange three of the communities.”

The national chief was in British Columbia earlier this month for another announcement from the Tk’emlúps te Secwépemc First Nation on an investigation into the remains of 215 children discovered at the Kamloops Indian Residential School. First publicized on May 28, the remains were located through ground-penetrating radar employed by the First Nation, setting off a series of similar discoveries at former residential school sites by the Muskowekwan First Nation and the Cowessess First Nation in saskatchewan, with another collection of remains uncovered on B.C.’s Penelekut Island July 13.

“Everyone is concerned,” said Archibald, referring to the many remains yet to be uncovered at other residential schools. “One of the top priorities is to find the resources needed.”

During her visit to Tseshaht territory Archibald was taken to the former site of the Alberni Indian Residential School, where the First Nation hopes to build a community centre replacing a building that remains from the institution that operated on the land for nearly a century.

“We talked about the deconstruction of the former building, when that will happen,” said Tseshaht Chief Councillor Ken Watts of his nation’s plans for the future of the site. “In our case it’s a place where we can come together, a multipurpose area to support our health and wellness.”

With the possibility of a federal election looming later this year, Archibald believes that securing adequate support to investigate Canada’s other former residential school sites should be a national priority.

“These crimes have to be investigated,” she said.

“I don’t like to call them schools,” added Archibald, referring to them as “institutions of assimilation and genocide.”

Other issues heard by the national chief included the right of five Nuu-chah-nulth nations to harvest and sell species from their respective territories, the scope of which was recently redefined by the B.C. Court of Appeal in a recent decision. The Huu-ay-aht First Nations stepped out of the Ahousaht et al. case in 2009 to proceed with treaty negotiations, but a clause in the Maa-nulth Final Agreement specifies their commercial right, along with the Uchucklesaht, Toquaht, Yuułuʔiłʔatḥ and the Ka:'yu:'k't'h'/Che:k'tles7et'h' First Nations that are part of the treaty.

“Maa-nulth nations could negotiate a fishery comparable to the five nations’ agreements with DFO, and then move those licences into the treaty where the fishing licences and rights would be constitutionally protected,” stated a Huu-ay-aht document on the “me too” clause in the treaty.

Huu-ay-aht Chief Councillor Robert Dennis Sr. hopes that the “me too” clause will enable his fellow citizens to convert existing crab licences to allow of commercial sale, as well as other species.

“We tabled a letter with her outlining what we wanted to do,” he said.

The Huu-ay-aht also looked for support in continuing with its Social Services Project, an initiative that stemmed from a public health emergency declared by the First Nation in 2018, when 21 per cent of its children were in foster care.

This percentage has since decreased, but the First Nation plans to continue with its initiatives to help keep children with their families, including Oomiiqsu, a supportive residential facility for mothers and children set to be constructed in Port Alberni.

“We’re coming up to a renewal agreement and we wanted to seek her support to help us with Indigenous Services Canada to renew that agreement for another five years,” noted Dennis.

“They see lots of single grants and single-year programs, but they really want it to be lasting,” she said of government funding for such initiatives, noting that better representation at the Port Alberni Port Authority is also needed by the Hupacasath. “They expressed the need to hold a seat at the port authority.”

As hundreds of First Nations in Canada push to have their issues recognized in Ottawa, Nuu-chah-nulth leaders hope that Archibald’s visit is the beginning of a strong relationship with the AFN.

“She wanted to go into community, she wanted to meet elders, she wanted to hear what the needs and concerns are of community,” said Charleson. “Right off the bat I know many Nuu-chah-nulth were shocked to see such an early visit.”

“Now that we’ve had this introduction, it opens the door for us to have a pathway to the national chief to address some of our issues,” added Dennis. “This is a first for us, to have the national chief come right to the Huu-ay-aht community and say, ‘What are your concerns?’ So she got off to a blazing start here coming out and learning what the issues are.”

“Hopefully she’ll always remember us,” said Watts, after the Tseshaht welcomed Archibald with songs and dance in front of the First Nation’s administrative building. “I think it was a pretty special moment to do it outside. We haven’t welcomed someone like that in a long time due to COVID.” 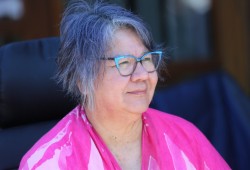 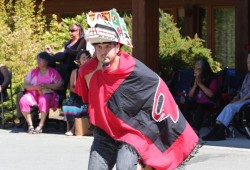 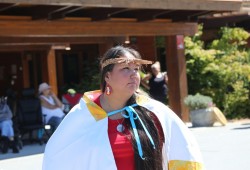 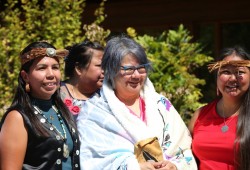