Students from Haahuupayak Elementary School dance on a new basketball court, on the site where a building from the Alberni Indian Residential School once stood. (Holly Stocking photos)

On a crisp, spring morning children from Haahuupayak Elementary school danced on the site where, generations before, their ancestors were housed at the Alberni Indian Residential School.

A basketball court is nearly complete on the location where Peake Hall once stood, a structure built in 1954 to serve as a dormitory for the assimilationist institution, which took in First Nations children from across the West Coast and B.C.’s Interior. After being run for most of a century, the residential school closed in 1973, followed by the demolition of Peake Hall in 2009.

On April 14 the Tseshaht First Nation celebrated the new basketball court, with traditional performances by the students before some residential school survivors who knew Peake Hall intimately.

“It was a good feeling that it’s being put to a good cause,” said Wally Samuel, who attended the residential school as a child. “A good use, for an area where we had bad times.”

The basketball court has NBA dimensions, with ten feet from the court boundary to the surrounding fence to provide a spacious area where spectator benches will be installed.

“We still have lines to paint, lighting to install and benches,” said Tseshaht Chief Councillor Ken Watts. “We got a donation from a local fundraising group for that.”

Supported by the First Nations Gaming Revenue Limited Partnership, Cisaa Forestry LLP, some internal funds and local donations, the court was built at a cost of over $75,000, during a time when the COVID-19 pandemic continues to disrupt the execution of building projects.

“Everything from asphalt to the hoops to everything else has all been delayed for the past several months due to COVID,” said Watts.

It was the pandemic’s effects on the First Nation’s ability to keep physically active that highlighted the need for such a facility.

“Many members since COVID-19 have said, ‘Hey, our kids are sitting at home, they’re not getting out, they have to keep their distance’,” Watts noted, adding that an outdoor facility made sense as concerns of infection continued. “Many people in our community have been saying, ‘We need to create a space for our youth to participate in physical activity.’ Basketball being such a core staple of our community’s sports and recreation, that seemed like a logical fit.”

Next to the basketball court Caldwell Hall still stands. Currently being used by the Nuu-chah-nulth Tribal Council, the former residential school building remains a reminder of the institution’s painful legacy.

The Tseshaht have hopes of using the site for a future multi-purpose building that facilitates health and wellness-focused activities, but more details need to be worked through before any firm plans can be made, explained Watts.

“The teardown of Caldwell Hall will happen, we just need to finalize when with Canada. But we also need to have some certainty that they’re going to help us rebuild,” he said, noting that other locations on the First Nation’s reserve could house a multi-purpose building as well. “We’re doing feasibility studies on a few different properties to see if it can go there.”

Although finishing touches like lines and benches have yet to be put in place, the basketball court was already being used by locals on the afternoon of the celebration. Watts said that when it is finally complete, residential school survivors will have the first chance to bounce a ball on the new court.

“Hopefully by the end of school we have the whole project done,” he said. “We have a ton of members who are interested in getting out there and playing. Before we do that, we want to provide space for survivors, and also make sure our kids are there.”

“I look forward to seeing young people having fun there and learning how to be a team - teamwork and community activity,” added Samuel. “It’s great that it’s accessible to a lot of young people. One of the problems of sustaining sports is lack of facilities where people can go just drop in and play a sport.” 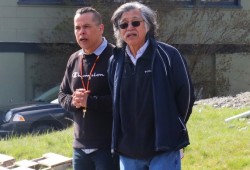 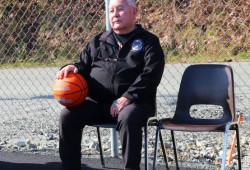 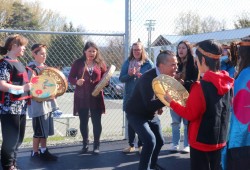