New directives for the province’s lawyers to avoid court battles with First Nations have hit the Nuchatlaht with bitter irony.

One month into the small First Nation’s trial in the B.C. Supreme Court, where the Nuchatlaht seek Aboriginal title over its territory on the northern half of Nootka Island, the provincial government announced a new approach to litigating that better aligns with B.C.’s Declaration on the Rights of Indigenous People’s Act. The directives stress the need to avoid lengthy, expensive court battles with First Nations whenever possible.

“Meaningful reconciliation is rarely achieved in courtrooms,” stated the directives, which were released April 21.

Yet the province will not drop its case against the Nuchatlaht, a court battle first launched in early 2017 that has cost the 167-member First Nation a considerable amount of financial resources, money that could have been used for health and community programs, said Nuchatlaht House Speaker Archie Little.

“The most costly part of this is what the Nuchatlaht people have given up,” he said. “It’s been a burden on our people because we’ve given up things that we need.”

The province’s litigation directives speak of the need to minimize the costs and complexity of court cases with First Nations, requiring the government to engage early and explore alternative forms of resolution.

When asked about the province’s approach in the Nuchatlaht case Premier John Horgan said that negotiations did not resolve the issue.

“[C]ourts are obviously the last recourse when there’s disagreements,” he said during a press conference in late March. “The case in Nuu-chah-nulth territory that you’re referring to is one that, unfortunately, couldn’t get resolved without it ending up in a court room.”

Little said that the province did not make efforts to negotiate the Aboriginal title claim.

“We were pushed into a corner where we had to carry on fighting,” he said of the Nuchatlaht’s dealings with the province. “We told them that we’ve got to be smart enough to sit down and talk, but that never happened. We were forced into court.”

So far Horgan is the only government representative who has commented on the case, which went to trial March 21 and is expected to last months. The premier encouraged journalists to direct questions to the Ministry of Attorney General, but they are saying nothing.

“This matter is before the courts, and I will not be commenting on it,” said Attorney General David Eby in a statement sent to Ha-Shilth-Sa. “More generally, the litigation directives are a formalization of my expectations of the conduct of lawyers in the Ministry of Attorney General. They are aimed at supporting negotiated resolutions, and where that is not possible, they are targeted to minimize the complexity and cost of court cases.”

The litigation directives state that the attorney general can intervene in a case “that may affect reconciliation,” but it appears that isn’t going to happen in the Nuchatlaht’s case, according to recent court records.

“[T]he Province has considered its pleading in the context of directives and at this time we’re not intending amendments,” said Jeff Echols, who is representing the provincial government, in an April 21 court transcript.

Since the Declaration Act, or DRIPA, was passed through the B.C. legislature in November 2019, the Nuchatlaht have been urging the attorney general to follow the stipulations of this legislation. DRIPA effectively adopts the United Nations Declaration on the Rights of Indigenous Peoples into provincial law, making British Columbia the first province to do so. UNDRIP’s article 26 states that, “Indigenous peoples have the right to own, use, develop and control the lands, territories and resources that they possess by reason of traditional ownership or other traditional occupation or use, as well as those which they have otherwise acquired.”

The province’s new legal directives require counsel to apply this declaration to cases involving First Nations, but Nuchatlaht leaders believe the government is doing this only when it’s convenient.

“Premier Horgan is giving B.C. credit for the transformative change that UNDRIP will bring, yet they have led us further away from reconciliation, and lack any signs of good faith. Apparently they need five more years to talk about implementation,” said Nuchatlaht Tyee Ha’wilth Jordan Michael. “There has been no show of good faith. The hypocrisy of the provincial government is very apparent, and needs to be addressed.”

Meanwhile, in the B.C. Supreme Court the Nuchatlaht’s lawyers have finished presenting their evidence; now it’s the province’s turn as well as Western Forest Products, which holds Crown tenure over the claim area. At stake is 20,000 hectares of forest on northern Nootka Island, territory that has been logged for generations at the discretion of companies operating under B.C.’s Forestry Act. 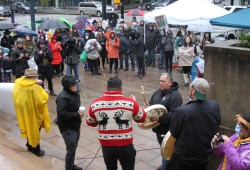 Nuchatlaht return to court for final arguments in title case

The Nuchatlaht return to court today, for the final arguments in the first Aboriginal title case…

‘Stolen’ land or in the public interest? Nuchatlaht trial begins in Vancouver