‘This walk is to think of those ladies’: March prompts hope for change

Over a hundred walked across Port Alberni on May 5, marking National Day of Awareness for Missing and Murdered Indigenous Women and Girls. (Eric Plummer photos)

Over a hundred walked through the pouring rain today in recognition of the many missing and murdered Indigenous women and girls, gathering near a spot where an Aboriginal woman died under suspicious circumstances just a month ago in Port Alberni.

Long considered a North American crisis that prompted a multi-million-dollar national inquiry in 2016, the issue has been prevalent in Nuu-chah-nulth families for generations, as many mourn the loss of their loved ones due to homicide or suspicious circumstances. Lisa Watts, a support worker with the Nuu-chah-nulth Tribal Council, works with families affected by the issue.

“In our Nuu-chah-nulth community alone, there are 53 women, girls, LGBTQ+, and we have two women missing, two. We don’t know what happened to them,” she said before the crowd that gathered at the totem pole by Port Alberni’s Victoria Quay. “This walk is to think of those ladies.”

According to the national inquiry, between 1980 and 2012 Aboriginal females accounted for 16 per cent of homicide victims, while representing four per cent of Canada’s female population. Between 2001 and 2015 the rate of Indigenous women murdered was nearly six times that of the rest of the country’s female population, according to a Statistics Canada report. May 5 recognizes this phenomenon as national day of awareness.

“We know that men and boys have been murdered as well,” said Watts on the rainy morning. “We ask that you remember. Put them in your heart and in your prayers as you walk.”

As the rain continued Hesquiaht member Linus Lucas noted the healing benefits of the downpour.

“Many of us see it as something that hinders our progress, but we see it as a way of our creator telling us we need to use it to wash away all the hurt that we’ve gone through,” he said. “Let us begin today by recognizing all those women that we’ve lost from unfortunate matters. Let us recognise those men who know and have been honest in telling us about how they inflicted pain on our women.”

Before the walk began students from Haahuupayak Elementary School performed. Teacher Trevor Little explained why the boys crouched at one point between songs.

“I like how the boys crouch today because there’s a new wave of learning here – a connection necessary for all men, for I have half of my mother inside me with that, a female spirit unacknowledged at times,” he said, referencing the many non-Nuu-chah-nulth who came for the walk. “It’s a lot easier to be heard when our neighbours, when the human beings here that share mother earth with us, acknowledge what we’ve been through.”

Less than a block away a red dress hangs on a tree over Roger Street, the site where Nicola-Cree Belcourt was found in the early morning hours of April 2. According to police, the Lower Nicola Indian Band member appeared to be fatally injured from an incident with a vehicle that was not at the scene when emergency responders arrived. The vehicle was later seized by RCMP, but charges have not yet been laid in connection to the 30-year-old’s death.

Belcourt had moved from her home of Merritt to Port Alberni in the last year.

“This was over a month ago, Port Alberni, right here, and we have no answers,” said Watts.

Among the Nuu-chah-nulth females who have been missing are Edith Margaret Claver, who was last seen walking away from the Ukrainian Christian Center in Renton, Washington on Nov. 27, 2009. The next day a church employee found her keys, wallet, union identification card and a small amount of cash stacked neatly near a dumpster alongside the building.

On Vancouver Island Lisa Marie Young has been missing since June 30, 2002, when she was out with friends in Nanaimo. Young’s aunt, Carol Frank, spoke at the hall with other family members.

“Today is Lisa’s birthday,” she said. “We’ve heard many stories, but still we have not found Lisa.”

Grace Frank also spoke for her family, who lost Chantel Moore on June 4, 2020 when the young woman was fatally shot by a police officer during a wellness check in Edmunston, New Brunswick. Although the incident sparked Canada-wide protests, the officer has been cleared of wrongdoing in the tragedy.

Agnes Keitlah addressed the loss of her sister, Nadine Marshall, whose body was found outside in Victoria’s Esquimalt area on Aug. 3, 2012. Keitlah encouraged others to be open about encountering violence. 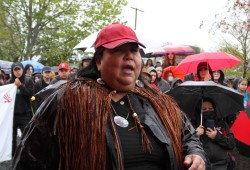 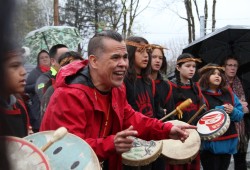 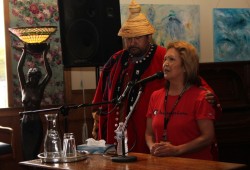 Reports Related to
Missing and murdered Indigenous women and girls

Paul Johnson was only eight years old when his mother, Pauline, was murdered in Vancouver. …