What was announced as “the largest, most transformative investment in salmon by any government in history” is largely Fisheries and Oceans Canada funding itself, leaving those who rely on the species out of decision making, according to concerns from West Coast First Nations.

This is how Canada’s former Fisheries Minister Bernadette Jordan introduced the Pacific Salmon Strategy Initiative in June 2021, a $647-million commitment to “stem historic declines in key Pacific salmon stocks and rebuild these species to a sustainable level,” stated the DFO.

One month after Jordan’s announcement her federal department shut down 60 per cent of British Columbia’s commercial salmon fisheries, continuing a push for the voluntary buy out of licences that has been in place for the last 25 years. Over this period the commercial fleet has declined by almost 50 per cent.

After the strategy was announced the Nuu-chah-nulth Council of Ha’wiih Forum on Fisheries listed its own priorities for the initiative, with attention to more closely monitoring stocks off the west coast of Vancouver Island and better accounting of catches, as well as reforms to the sports fishery.

“The recreational fishery is a significant source of mortality for all [west coast Vancouver Island] salmon,” stated a letter from the council to DFO, dated March 1, 2022.

The letter tasks the federal department to remove the catch-and-release method currently permitted for salmon at risk, and to “increase catch monitoring standards for charter and lodge operators.”

Although the initiative cites “collaboration amongst First Nations at the provincial scale”, two thirds of the $647 million will be used within the DFO, according to information presented at the Council of Ha’wiih Forum on June 9. Another $100 million is set aside for the Salmon Restoration and Innovation Fund, with $94 million expected to pay for commercial license retirements, according to the council.

Indigenous groups have been left out from using any of the funds, said Hugh Braker, president of the First Nations Fisheries Council.

“All they did was shuffle money around in their own department,” he said. “It’s not enough for bureaucrats in Ottawa and Vancouver to decide what’s best for Pacific salmon.”

During the forum Sonora Marin, coordinator of the Island Marine Aquatic Working Group, reported that discussions with DFO personal revealed that the initiative is “hatchery dominant” with respect to rebuilding stocks. The $647-million investment is more about a mindset change within the federal department, designed to remove “silos” of disconnected specializations, she said.

On May 31 Courtenay-Alberni MP Gord Johns pressed current Fisheries Minister Joyce Murray on the issue during a Parliament debate. Johns said the salmon initiative has shown “no genuine engagement with First Nations”.

“[A]ll the evidence to date points to the PSSI as yet another example of the department directing long-awaited funding toward internal priorities instead of working with First Nations to decide how best to allocate limited resources,” said Johns.

“One of the key pillars of the PSSI is collaboration,” countered Murray. “On the one hand, we are being told we are not moving quickly enough, but on the other hand we are very committed to collaborating with Indigenous communities and others, and that work is ongoing.”

On June 10 Sarah Murdoch, senior director of the PSSI, addressed the Council of Ha’wiih. She stressed the need for the federal department to work with First Nations, although Murdoch cautioned the DFO cannot distribute funds in an ineffective way.

“There is no one authority that will be able to address this alone,” she said. “What we can’t do is spread the money out and spread the resources out to the point that we’re not having any meaningful impact.”

During the forum Ditidaht Chief Councillor Brian Tate noted there is no mention of how the PSSI will be incorporating the Indigenous expertise of those who have relied upon West Coast salmon for countless generations.

“Is there a plan to work with First Nations and gather traditional knowledge?” he asked Murdoch.

The PSSI head responded by noting the formation of a stewardship directorate that will help inform the initiative, and that future conversations with First Nations will take place.

“Far too long we have been pushed to the side and our knowledge has been ignored,” said Hasheukumiss, Ahousaht’s acting Tyee Ha’wilth, who blamed DFO’s mismanagement for the collapse of salmon stocks. “You need to come to the table and put us in there immediately.”

“We can’t forget the past and how we got here,” said Murdoch, pledging a “different future” going forward.

As the salmon initiative aims to “stabilize and restore Pacific salmon,” Uu-a-thluk, the Nuu-chah-nulth Tribal Council’s fisheries department, is blaming the species’ decline on the mismanagement of forest and ocean resources.

“Over-aggressive commercial and recreational fisheries, large-scale habitat loss from industrial logging and other developments, and changing environmental conditions have all lead to the significant declines in [west coast Vancouver Island] salmon populations,” wrote Jim Lane, Uu-a-thuk deputy program manager, in a letter sent to Fisheries and Oceans Canada one month after the Pacific Salmon Strategy Initiative was announced in 2021.

Yet information listed by the DFO with the initiative makes no mention of historic overfishing, and little reference is made to the effects of logging on salmon habitat. The main factor identified is the complex series of environmental imbalances brought about by a rapidly changing climate, as detailed in the DFO’s 2019 State of Canadian Pacific Salmon.

“In Canada, the rate of warming over the past century has been double the global average, and is even greater at northern latitudes,” stated the report.

Global warming has brought more droughts and periods of heavy rain that drastically impact the streams salmon use to migrate. This is combined with a steady warming of the Pacific Ocean over the last half century, a dynamic that brings less nutritious zooplankton, species that form the base of the salmon food web, states the report. 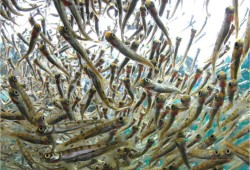 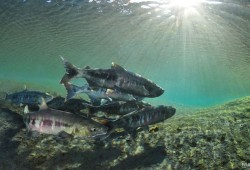