As rain poured down on hup̓icatḥ hitinquis (Opitsaht Beach), Leah Morgan lifted her arms to the sky and looked up. Unfazed by the cold, damp air, she inhaled deeply with her eyes closed. A gentle smile emerged across her face.

The event was open to Tla-o-qui-aht members, and available to the public virtually through Zoom. Over 30 people signed up for the online class, with 100 per cent of the proceeds going towards Tla-o-qui-aht's youth program.

This year, the summer solstice coincided with the 26th annual National Indigenous Peoples Day on June 21.

“It seemed to go hand-in-hand with doing something like yoga,” said Morgan.

Since being introduced to yoga in October, Morgan said she’s changed both “inside and out.”

“I have a brighter relationship with myself,” she said. “Yoga helps me with my everyday thought process.”

Morgan, who works as Tla-o-qui-aht’s records officer and IRA, helped to organize the event in a bid to share yoga’s health benefits with other members from her nation.

Coastal Bliss yoga studio is located in Tofino, on the ancestral lands of the Tla-o-qui-aht First Nation. Most teachers begin or end their classes by acknowledging the lands they practice on.

It’s a gesture that makes Morgan feel welcome and accepted.

“They have acknowledgement of our territory and they have that respect for us,” she said.

His-shuk-nish-tsa-waak is a Nuu-chah-nulth teaching that means “everything is one.”

Similarly, yoga means “to unite.” Because of these shared foundational principles, Morgan said yoga naturally fit into her life.

Coastal Bliss does its best to honour their pledge as a member of Tla-o-qui-aht’s Tribal Parks Allies program, McPherson said.

Part of being an ally is creating a relationship with the land and acknowledging the land, she added.

The yoga class sparked a whole day of activities planned by the nation, including language bingo, lahal, and a scavenger hunt.

Deb Masso, language digital archivist for Tla-o-qui-aht First Nation, said that after over two years of being unable to gather because of COVID-19, the event marks a transition.

The pandemic changed the way people interact by intensifying their reliance on smartphones and technology, said Masso.

“I hope people take a moment to get off their phones and just celebrate being together,” she said. “And to hopefully encourage our people to get into learning our language.”

To uplift their own community, the day was called ƛaʔuukʷiʔatḥ (Tla-o-qui-aht) Day.

Masso said the energy of her ancestors helped guide the day.

“I think about all the old people that I knew that lived out here and died here and are still a part of this land,” she said. “There’s so much power here.”

Joe Martin, Tla-o-qui-aht councillor, said National Indigenous People’s Day presents an opportunity to educate non-Indigenous people on Canada’s colonial legacy. But, he said, it shouldn’t be limited to one day.

“Every day should be Indigenous People’s Day,” he said.

By the end of the yoga class, the towel Morgan had draped over her shoulders was soaking wet. But it didn’t keep the smile off her face.

“This is our first real get together with our community since we had a lockdown,” she said. “I’m home – and it’s really exciting.” 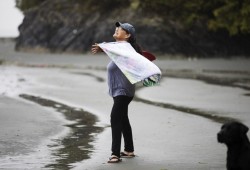