Ditidaht Community School students have created a hard-cover book filled with illustrations, photography, poetry and musings about their home and their elders. Copies of the 25-page book, called Letters to Our Elders, were distributed to Ditidaht elders at a community lunch served in the school gym on June 22.

“Letters to Our Elders is a collection of student expressions for the Elders of Ditidaht Nation; for the victims of the residential school system and for those who have fought and continue to fight the legacy of that atrocity yesterday, today, and tomorrow,” reads the inside cover of the book.

Shaniece Anika Edgar was in grade 10 when she wrote pieces for the book. Now in Grade 11, Anika, as she prefers to be called, said she learned a lot following the news that 215 graves were found on the grounds of the former Kamloops Indian Residential School.

“I threw it out of my memory because I didn’t want it to be there,” said Edgar.

She said discussions about the discovery of graves at residential schools “pulled her down”, but she did her best not to let it, even though the number of unmarked graves discovered at other Canadian residential school sites continues to grow.

The sadness prompted her to write her poem called ‘If Only’.

“It’s a main question I hear,” said Edgar. “If only things were different, if only it didn’t happen, if only so much wasn’t taken from us…where would we be?”

She went on to say that there’s so much fear among her community because of what happened to her ancestors.

“I think there will be a lot more hope in the future because we are working on it now, to build us up,” she added.

Edgar is two generations removed from residential school, so she admits it’s hard for her to relate to what survivors went through. She said her paternal grandfather was a student. She is now in a school where she gets to be with family and spends an hour every day learning her language and culture.

Margaret Eaton, a residential school support worker, welcomed the elders, telling them that she knows it is difficult being there, but she made sure emotional support for them was available, should they need it.

Eaton told Ha-Shilth-Sa that the idea for the book got its start in 2021 following the news that 215 unmarked graves were found on the grounds of the former Kamloops Indian Residential School. The discovery, she noted, has raised awareness and opened discussions about what happened to Indigenous ancestors.

“It’s helped the kids understand what their grandparents and parents went through,” said Eaton.

To the elders, she said, “Your kids and grandkids wrote their thoughts and feelings in stories, poems and letters and their teacher printed their work.”

Teacher Kaila Pidwerbeski said there were 18 Grade 8-12 students involved in the project last year. They were to present the books then, but the pandemic prevented large gatherings, and so they waited until now to distribute the books.

The students gave books to each of the elders. They began reading immediately, one, pressing her hand over her heart as she read the words.

Elected Chief Brian Tate spoke about colonialism and the legacy of residential schools. First Nations, he said, were pushed aside so government could gain access to their resources. Residential schools were designed to assimilate young Indigenous Canadians by creating a break between the children and their elder family members.

But the culture and language survived and continues to be nurtured in modern schools.

Tate praised the elders for not only surviving the residential school system, but also for hanging onto their language and teachings, passing it on to the youth.

“Our children are our future, they mimic what they see in us, how we speak and how we treat one another,” said Tate.

Only 20 books were printed but the school can make more copies if people are interested. To enquire about the book, call Ditidaht Community School at 250-745-3223. 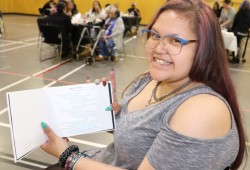