It’s been 20 years since Tla-o-qui-aht woman Lisa Marie Young went missing from Nanaimo, and family, friends and supporters still walk in her memory each year hoping that someday justice will be served.

Dozens showed up for this year’s annual walk on June 26 that lead supporters from the Nanaimo RCMP detachment to Maffeo Sutton Park along the city’s waterfront. Once at the park, those in attendance shared food with Young’s family and heard from speakers, who voiced the hope that cold cases like Young’s and other Missing and Murdered Indigenous Women and Girls (MMIWG) will one day be solved.

Young, who was 21 at the time of her disappearance, was last seen at approximately 3 a.m. on June 30, 2002. The young woman had spent the night out with friends, first at a Nanaimo nightclub, then two house parties. She left the second party to get something to eat, and accepted a ride with Christopher William Adair, a man she had just met that evening, according to reports from the time.

A friend reported receiving a text message from Young at 4:30 a.m., which read “come get me, they won’t let me leave.”

As time passes, police continue to urge anyone with old or new information to come forward.

In the past couple years, ground-penetrating radar and a police dog, trained in finding human remains, have conducted searches at undisclosed sites around Nanaimo. The still active and ongoing investigation involves around 15,000 documents and hundreds of witnesses.

Young’s aunt, Carol Frank, said no new information has surfaced since last year. Although people continue to come forward with information, nothing has led to a crack in the case.

“The lead investigator stays in touch with us. We can call him, email him, set up meetings so that really helps,” Frank said. “We’re still receiving tips. I’ll forward the information to the investigator.”

Frank said her family has received a lot of support throughout the years from people who genuinely want to help get justice for her niece. In 2020, the Lil’ Red Dress Project funded an electronic billboard along the highway in Nanoose Bay with Young’s photo and a call for information. This year, the same information will be displayed on Nanaimo city buses.

“With the bus add we were going to fundraise but people donated within a day and a half, two days,” Frank said. “We have so many people that are caring and want this case solved and to find Lisa. We’ve got lots of support, lots of people that we don’t even know around the world that want justice.”

Frank said it’s important to keep walking for her niece year after year to carry on Young’s memory for her late mother, Frank’s sister, Joanne, who passed away in 2017.

“[Joanne] was the one that kept Lisa in the media’s attention because she didn’t want anybody to forget her. It’s just important for our family to have some kind of closure,” Frank said. “My sister passed away June 21, 2017 and she never got to find her only daughter.”

Frank said social media and a podcast produced by Laura Palmer called Island Crime: Where is Lisa? has helped bring even more attention to the case over the past few years.

Lisa Watts, MMIWG support worker with the Nuu-chah-nulth Tribal Council, spoke to supporters at Maffeo Sutton Park on the 20th anniversary of Young’s disappearance. She called on everyone to have a moment of silence in Young’s honour.

“She was a very lovely beautiful girl, a human being who contributed to her community and she’s gone… unbelievable,” Watts said. “Today we stop for a moment and remember what can we do; what we can do is what we did here for a little while today, we sat and ate with Lisa’s family, we sat, we talked with each other.”

Nanaimo Mayor Leonard Krog proclaimed June 26, 2022 as Lisa Marie Young day in the City of Nanaimo and June 30 as Lights For Lisa —where residents are encouraged to leave their patio light on in Young’s memory.

“I’m a parent and grandparent, and I cannot begin to imagine what it must have been like for Lisa’s family when she went missing and after all these years no justice, no knowledge, no closure,” Krog said. “There is no greater love, I believe, than the love that exists between a parent and a child… and I cannot begin to imagine all of those years when [Young’s] mother survived and lived to think about her daughter and what may have happened to her.”

Krog urged the RCMP to always keep an open file for Young and to never give up the search.

Earlier this year, an anonymous donor pledged $50,000 for any information that leads to the location and/or recovery of Young’s remains. 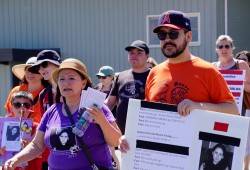 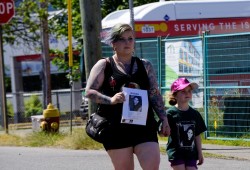 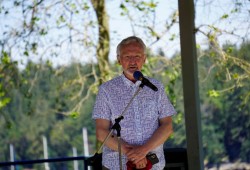 Reports Related to
Missing and murdered Indigenous women and girls

‘This walk is to think of those ladies’: March prompts hope for change

Paul Johnson was only eight years old when his mother, Pauline, was murdered in Vancouver. …