Tla-o-qui-aht Tribal Parks Guardian Gisele Martin talks to a visitor at the road closure along West Main Forest Service Road, near Tofino, on August 10, 2021. Once again maintaining the back roads is taking up the attention of the Tribal Parks Guardians, due to extensive camping in the area from people with nowhere to stay in Tofino. (Melissa Renwick photo)

Tla-o-qui-aht First Nation is calling upon regional leaders on Vancouver Island’s west coast to come together to tackle the issue of affordable housing in the region.

One consequence of the housing crisis is that Tla-o-qui-aht members have lost the ability to return to live in their homelands, read a release issued by Tla-o-qui-aht’s ha’wiih (hereditary chiefs) and elected council on July 4.

Meanwhile, visitors looking for an affordable place to camp are lucky to find a $200 site, the release added.

Without anywhere to go, many are turning to the backroads around Kennedy Lake.

Instead of focusing on “progressive stewardship priorities,” the release said Tla-o-qui-aht Tribal Parks Guardians are using their resources to patrol 40 kilometres of backroads around Kennedy Lake every day in the summer.

Through consistent education and awareness, Tla-o-qui-aht Natural Resources Manager Saya Masso said the guardians hope to instill visitors with a sense of social responsibility to not leave garbage behind.

Tla-o-qui-aht member Timmy Masso organized a road closure of west main last summer to evict campers and block tourists from accessing the area in response to the amount of pollution being left behind and concerns over illegal campfires.

By shutting down the road, Timmy hoped it would draw attention to the environmental and health risks, encouraging regional leaders to come together to determine a solution.

The District of Ucluelet responded by providing the nation with $20,000 towards their stewardship efforts.

Ucluelet Mayor Mayco Noel said “it was the right thing to do.”

In the fall, Noel said the district is going to review how the money was spent and look at providing annual funding to support the guardians’ stewardship of the Kennedy Lake backroads.

“They’re taking on the subject matter head on,” he said. “It’s a tribute to Tla-o-qui-aht wanting to step up and try to find some interim solution in order to mitigate some of the negative impacts that are happening in the backcountry.”

John Jack is the Alberni‐Clayoquot Regional District (ACRD) board chair and a Huu-ay-aht First Nation council member. The ACRD serves as local government to six electoral areas, including Long Beach. As a result of Long Beach’s small tax base, Jack said the ACRD has limited funding to enforce anything in the area.

“To make it about money is limiting,” he said. “A lot of the responsibility when it comes to how Crown land and how First Nations territory is being used really comes down to how it's being looked at and cared for by the province. Outside of Tla-o-qui-aht’s specific reserves or treaty lands it’s still the responsibility of the Crown to handle this in a way that makes sense. And that hasn't occurred yet.”

The backroads around Kennedy Lake are subject to multiple jurisdictions, overlapping with Tla-o-qui-aht, the ACRD and Parks Canada, said Jack.

“Because of all these overlaps, we are really trying to take on a convener-type [approach] of bringing people together to have conversations about what we can do to organize a response to not only the illegal camping and the overflows that exist, but the impacts of garbage and human waste that are accumulating.”

The impact on the health and safety of the area is “significant,” said Jack.

“It’s something that we all recognize,” he said. “The solution, however, is not something that is apparent at the moment beyond the province stepping up with money.”

While these are necessary conversations between regional leaders, Jack said they all lead back to the housing crisis.

Despite only having a population of roughly 2,000 residents, Tofino draws around 600,000 visitors every year.

“I feel the Airbnb issue has taken a lot of housing stock away from the region and it needs to be looked at,” said Saya Masso.

For the most part, Jack said the ACRD is restricted from providing housing solutions on the west coast given its jurisdiction, so it “must” involve the municipalities of Tofino and Ucluelet.

"What we need to see is real action from local governments,” he said. “And real action from the province in regards to how we're going to look at planning and zoning our communities to allow for greater housing [to be] built and for higher density to exist on established lots.”

The District of Ucluelet is currently considering changing bylaws to prioritize long-term residential housing by limiting nightly rentals in residential neighbourhoods. The bylaw changes would remove Bed and Breakfast as the permitted secondary use for all single-family residential zones.

“Homes that are in residential neighbourhoods should not be rented out as a nightly rental – that's a commercial enterprise,” Noel said.

The bylaw changes are one way the District of Ucluelet is attempting to resolve the housing crisis, but Noel said he’s aware many residents rely on nightly rental income to pay their mortgages.

“We're playing with these ideas and really going out into the community to see what they would like to see happen,” he said.

Tla-o-qui-aht First Nation has called on Tofino to put a cap on the current level of short-term rental business licences, but it remains to be seen if the municipality will do this.

The District of Tofino wrote in an email that it will “continue working with Tla-o-qui-aht First Nation and regional partners, as well as the provincial and federal governments as appropriate, to address both regional housing needs and backcountry camping concerns.”

David Eby, attorney general and the province’s minister responsible for housing, has been proposing to take over zoning and land-use planning from local governments in a bid to force them to address the housing crisis.

“There’s something busted about the way politics work at a local level,” said Jack. “In many ways, there is an inert inertia in regards to what the community wants from a local perspective, rather than what the entire region needs, and individuals need, from a housing perspective.”

Because of that, the mix of housing on offer is “inadequate," he said.

“Real solutions to housing are not really being pursued with the same vigor that they should be,” Jack added.

The Tofino Housing Corporation, a private entity owned by the District of Tofino, is aiming to deliver 150 rental units and 30 price-restricted, locally owned homes to Tofino by 2030.

Jack said the Tofino Housing Corporation is a solution that gives him “hope”, but it’s not moving quick enough.

As Tla-o-qui-aht continues to confront these issues, they have offered a number of solutions.

Modelled after tourist destinations such as Whistler and Banff, the nation is proposing that a fully serviced overflow parking lot be established near the Tofino airport to provide safe and sanitary overnight parking for travellers without anywhere else to go.

The nation is also suggesting that a permanent campsite at Čuuis (Rainbow Beach) is established and that a regional housing plan that addresses the needs of those impacted by the housing crisis is developed and implemented.

“We need to do better,” said Saya Masso. “The current plan is not working.” 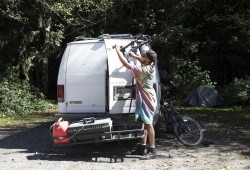 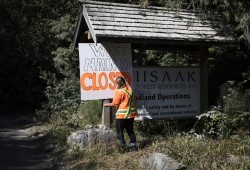 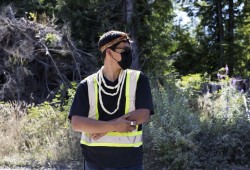 Other Stories in
Addictions, Housing