On Aug. 2 a new design for C̕awak ʔqin Forestry was unveiled outside the company’s office on Franklin River Road, south of Port Alberni. (Holly Stocking photos)

The Huu-ay-aht and Western Forest Products unveiled a design this week to be placed throughout their partnership company, with attention to a more holistic approach to using natural resources than what has been practiced in the past.

On Tuesday, Aug. 2 C̕awak ʔqin Forestry presented the new logo at its Franklin River Road office south of Port Alberni, with dozens of representatives present from the local Tseshaht and Hupacasath First Nations, as well as municipal and provincial governments. Translating as ‘we are one’ in the Nuu-chah-nulth language, C̕awak ʔqin is a partnership between Western and the Huu-ay-aht’s Huumiis Ventures. C̕awak ʔqin Forestry manages Tree Farm Licence 44, a 137-hectare section of Crown forest south of Port Alberni and Great Central Lake.

Designed by father and son Huu-ay-aht members Ed Johnson Sr. and Edward R. Johnson, the logo depicts a bear digging its claws into two fish, with a tree growing in the centre.

During the unveiling event the younger Johnson told a story of how the bear got its claws.

“The eagle saw a bear trying to catch a salmon in the river,” he said. “He wasn’t very successful, he didn’t have claws then. The eagle gifted him claws.”

C̕awak ʔqin Forestry is using the logo to illustrate how resources will be managed sustainably.

“The bear represents the forest, it represents the rivers. The bear hunts, it seeks out the salmon,” said Johnson, who is a Huu-ay-aht elected councillor. “The tree represents our forest. Together it creates a cycle.”

The design serves as another indication of the growing role the Huu-ay-aht are taking in the industry through its partnership with Western Forest Products. Forestry now accounts for 60 to 75 per cent of annual revenue generated by the Huu-ay-aht Group of Businesses, and the number of the First Nation’s members employed in the industry has grown from two in 1995 to 44.

“It’s time that we showcase to the world that we know how to manage a forest,” said Huu-ay-aht Chief Councillor Robert Dennis Sr. on Aug. 2. “We’re very glad to work with Western because, in actuality when got down to the depth of things, we found that we actually have very similar goals, very similar objectives.”

But this wasn’t always the case for the Barkley Sound First Nation and the logging companies that operated in its territory. For generations the Huu-ay-aht were left out of harvesting decisions and profits, as found by a Specific Claims Tribunal in 2014 with a ruling concerning the management of forest from 1948 to 1969, after the land was sold to MacMillan Bloedel.

That ruling brought a $13.8-million settlement for the First Nation, but by 1997 historical damage was evident, as 62 per cent of the Sarita River watershed had been logged, including 97 per cent of the flood plain.

“I can remember Chief Louie Nookemis telling the logging companies way back in the ‘40s, you shouldn’t log to the rivers, don’t log by the salmon streams, avoid that. Leave some trees on the hillside so there’s runoff,” recalled Dennis. “These were all things that back then were irrelevant to the managers of the day, but if you look at our history, they were talking about stewardship values long before we started putting them on paper.”

But the future will be different in the region, said Shannon Janzen, C̕awak ʔqin Forestry’s board chair and vice-president of Partnerships and Sustainability with Western.

“Today is about demonstrating shared values, shared commitment, and the change that we want to see in the world,” she said. “We’re going to see the forest for more than just trees - to manage things sustainably going forward, for fish, for wildlife, and to ensure the future is secure for every one who is working here in the working forest.”

The need for change in how B.C.’s forests are managed was evident in a 2020 report from the province’s Old Growth Strategic Review Panel, which noted a “paradigm shift” in how the public views the resource’s environmental and cultural importance. Approximately 50,000 people across the province are still employed in forestry, but the government is predicting 4,500 jobs that will be lost as harvests decline by 12 per cent over the next three years, according to the B.C. budget released earlier this year.

In a measure to better protect old growth forests, last year the province announced 1.7 million hectares of harvest deferrals across B.C. Workers and people reliant on the forestry industry protested across the West Coast, including hundreds who held up Port Alberni’s main road in December outside of the office of the area’s MLA Josie Osborne.

While she addressed the Anacla Old Growth Summit in April, Forestry Minister Katrine Conroy called the deferrals a “temporary measure to prevent irreversible loss”, while noting that a complete ban on old growth logging isn’t reasonable.

The Huu-ay-aht have spoken about lowering the annual allowable cut on its treaty settlement land under what would otherwise be permitted on provincial Crown land. But the First Nation has also contended that ceasing all old growth harvesting would be unviable economically and deprive its citizens of a cultural practice that has taken place for thousands of years.

A technical analysis released by C̕awak ʔqin Forestry in April found that three quarters of old growth in TFL 44 is either protected or outside of land where timber can be harvested. With current measures in place, the Huu-ay-aht are predicting that the volume of old growth in its territory will actually grow over the next generation, as more stands reach the 250-year mark.

“I’m very interested in the conversations that we’ll have with the contractors and the unions from an Indigenous perspective, because that’s a very important aspect of reconciliation,” said Jack, who is also an elected councillor with the Huu-ay-aht. “This is a solution that will not only serve as an example for the rest of the province and potentially for the rest of the country, but also one that will bring us into the future for generations.” 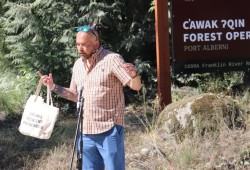 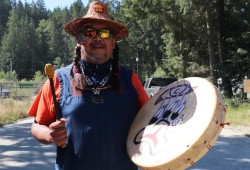