‘The homeland of our ancestors since the beginning of time’: Film presents Yuquot to a wider audience

Margaretta James, president of the Land of Maquinna Cultural Society, appears in a new film about Yuquot. Changing Perspectives: What has been the impact of colonization on the people of Yuquot? Is a 15-minute documentary film set for release online in January. (Submitted video still)

The 30th anniversary of Yuquot Summerfest included a screening of a recently completed film that introduces the ancestral home of the Mowachaht people to a wider audience.

Titled Changing Perspectives: What has been the impact of colonization on the people of Yuquot?, the 15-minute documentary incorporates new footage of the historic village site, interviews with elders, archive photographs and animation to present an overview of Yuquot’s importance. Long considered the centre of the world for Mowachaht/Muchalaht people, by the late 18th century the village site on the southern edge of Nootka Island had become the capital for 17 tribes in Nootka Sound. The West Coast’s first fir trading post was established nearby, after contact occurred with Europeans in the late 1700s.

The film is expected to be available for online viewing in January in English and French, as part of a collection of other video pieces to be presented on a website that delves into the effects of colonization on certain First Nations.

“Ultimately you’ll come to a website, which is about a one-hour experience of short films that look at the Yuquot story, the Heiltsuk story, an introduction to what was it like before the Europeans came here,” said the film’s producer Timothy Bateman. “And then we unpack why were the Europeans coming here, what were they looking for? What was [Captain] Vancouver trying to do? And finally, we look at navigation and ship design from the European perspective.”

“We even have some fun ones in there that talk about the language, how sailors speak - when people say, ‘Loose the sheets’ and things like that,” added Paul Lowry of Gloo Studios, which produced the film.

A target audience is school children in Grades 4 to 8. Worksheets and learning materials will also be provided for teachers.

But Bateman emphases that the film is ultimately for the people of the Mowachaht/Muchalaht First Nation, as close consultations were conducted since the project began in the spring of 2019.

“We really wanted to produce something that was useful from their point of view,” he said.

A central source of research became the Yuquot Agenda Paper, a document that the First Nation submitted to the Historic Sites and Monuments Board of Canada in 1997 to gain Yuquot recognition as a National Historic Site. The primary message in this paper was led by the late Tyee Ha’wilth Ambrose Maquinna.

“This region has been the homeland of our ancestors since the beginning of time,” reads the document. “It is our home today and will continue to be for future Mowachaht/Muchalaht generations.”

But the agenda paper also notes a historical distrust among the First Nation of Parks Canada “as a result of numerous plans to develop Yuquot in the past”.

“These plans were consistently resisted by the community as their views and concerns were never seriously considered but were dominated by the process of government bureaucracy,” continues the paper.

Historian Dylan Burrows, who is a PhD candidate at the University of British Columbia, worked to ensure the project didn’t veer away from the First Nation’s perspective.

“Quite often outsiders come to simply to extract information to further their own careers, whether you’re an archaeologist or just a scholar,” cautioned Burrows of dealings with remote First Nations.

He conducted interviews with key Mowachaht/Muchalaht members, and the film features footage of Tyee Ha’wilth Michael Maquinna, Margaretta James, president of the Land of Maquinna Cultural Society, and Ray Williams, who has lived in Yuquot for nearly all of his life.

“The project itself is also supplemental to the histories that already exist within the community,” explained Burrows. “Elders hold a lot of knowledge of what we’ve already spoken about in the video. We presented it in an easy, accessible format for youth to listen to and, importantly, enable them to recontextualize the present.”

The film also uses footage from The Washing of Tears, a 1994 National Film Board documentary that presents life for the Mowachaht/Muchalaht community while living on the Ahaminaquus reserve south of Gold River. Starting in 1966, the First Nation underwent a process of relocating from Yuquot to the 3.6-hectare area on Muchalaht Bay. But the new home proved to be a drastic change from the southern shore of Nootka Island. A newly constructed pulp mill was next to the reserve, tormenting the community with noise and pollution for years, according to the late Chief Jerry Jack, who appears in the film.

In 1996 the community was moved further inland to Tsaxana, where they remain today.

Changing Perspectives was funded by Digital Museums Canada, which is part of the Natural History Museum in Ottawa. 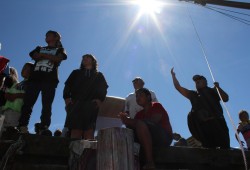