Northern Region Games foster self discovery away from modern distractions

Jack John, 14, pulls in a tug of war during the Northern Region Games on Aug. 10, which were held in Yuquot this year.  After a three-year absence due to COVID-19, the Nuu-chah-nulth gathering returned in 2022, bringing more than 300 to converge at the Nootka Island location for days of rebuilding family ties. (Eric Plummer photos)

As rain passed over Yuquot one August morning, a crowd of children filled the community’s church, their parents and caregivers looking over the toys and card games spread across the building’s floor. Hovering above the activity stood replicas of sacred carvings by the Maquinna and Jack families, colourful pieces glowing in the church’s dark that depict whales, bears, eagles, serpents and hunters, with a thunderbird in flight.

The otherwise quiet community on the southern shore of Nootka Island saw hundreds of campers in early August, totalling as many as 317 during the Northern Region Games that were held Aug. 8-11. It’s been years since so many gathered in Yuquot, the ancestral home of Mowachaht/Muchalaht First Nation, where people have lived for over 4,300 years.

For over a decade northern Nuu-chah-nulth nations held the games in alternating communities, but the COVID-19 pandemic halted the annual gathering, which was last hosted in Zeballos by the Ehattesaht First Nation in 2019.

Rose Jack, Mowachaht/Muchalaht’s manager of Community Health and Family Services, said that her staff, along with youth coordinators Norma Johnson and John Amos, as well as elders advocate Margaretta James, came together to decide that the First Nation would resume the tradition by hosting the games this year. The event followed a week-long annual camp out at Yuquot that Mowachaht/Muchalaht has gathered for since 1992.

“In meeting with youth workers and staff from the other northern tribes the decision was made to have the games in Yuquot since we were already out there,” said Jack, adding that Annie John and Jessie E. Smith of Ehattesaht and Audrey Smith of Nuchatlaht also had roles in pulling the games together.

The organizers spent the next six weeks planning events for the games, making grocery lists, shopping for t-shirts and competition ribbons as well as meeting with the other northern nations to coordinate gathering in the remote location.

At a site only accessible by boat or float plane, once the games were underway John Amos was constantly on call. With no internet connection or cell phone coverage, the radio at Amos’ hip allowed little rest from the games’ coordinating duties.

“It’s always such a joy,” said the youth coordinator of returning to Yuquot. “We get to ground ourselves. We break away from all that technology, all that hustle and bustle in civilization.”

Outside the church 137 tents stretched across the grass, circling a field near Yuquot’s shore, where tug of war and a coordinated game of tag occupied dozens of children and teenagers for hours in the afternoon.

“We spent a little over $5,000 for all the food and water for the Northern Region Games,” commented Amos. “I’d do this again 100 times over just to see everybody’s face here, all the happiness, all the joy that’s happening.”

“Our main goal here is for these kids to have fun,” continued Amos, noting the importance of being present and attentive with the children. “To be consistent with them, that’s what everybody needs in their life - especially when they’re young.”

Small clusters of youth remained in the church in the afternoon, rap music filling the building that was originally constructed in 1956 in honour of Catholic Pope St. Pius X. Statues of the Virgin Mary and Jesus on the cross sat quietly upstairs in the afternoon sunlight, while stained glass illustrations at the building’s entrance depict nobly dressed 18th century Europeans signing documents at Yuquot’s shore, the local Indigenous people watching in the background.

The diversity of the church’s contents serves as a reminder of Yuquot’s storied history. Besides being the ancestral home of the Mowachaht, the settlement was British Columbia’s first point of contact between Europeans and First Nations peoples, when the site became a trading destination for the British and Spanish in the late 1700s. During the Nootka Sound Controversy of 1789-94, conflicting trading interests brought these two European superpowers to the brink of war. Since 1923 Yuquot, or Friendly Cove, has been designated as a National Historic Site.

For the last 30 years, members of the Mowachaht/Muchalaht community have ventured to the ancient site each summer to camp and celebrate their origins. This year’s Northern Region Games opened up the location for other First Nations, including Ehattesaht/Chinehkint, Nuchatlaht and Ka:'yu:'k't'h'/Che:k'tles7et'h'.

A large family from Ahousaht also travelled to Yuquot for 10 days of camping. Lil’star brought nine youngsters with her, including four of her biological children and another five who she is fostering with husband Paul Frank.

“There’s no WiFi for them, there’s no games for them - it’s more like finding themselves and who they are, and that they’re going to okay,” said Lil’star, who has family ties to Yuquot on her grandfather’s side.

The mother has previously fostered another 26 children in Ahousaht. The family has a scheduled chore list, duties the children must undertake each day before they are allowed to go on digital devices.

“Kids will come to us so they’re not split off and taken off the reserve,” said Lil’star of fostering. “I’ve been in there, my parents didn’t raise me. My aunt, who I call mom, is my mom’s sister. My grandparents from here raised me. I just love kids, I wanted a lot of kids.”

The large family regularly goes camping, and Lil’star has found that gatherings away from the distractions of modern society benefit each child’s sense of identity.

Ray Williams has the only household to remain in Yuquot, since the First Nation was moved to a reserve near Gold River in the late 1960s and ‘70s. As a young child he watched an earlier version of the Northern Region Games in the 1940s and early 1950s. Nootka Days began each May 24th in Yuquot, running for four days with participation from the Ahousaht, Ehattesaht, Hesquiaht and Ka:'yu:'k't'h' nations.

“There were no trophies or anything, they were just fun games,” recalled Williams. “Every evening of every day they would do dances and sing songs.”

The elder chuckles remembering the events from his youth, including three-legged races, swimming, diving, wheelbarrow races, bathtub races, lahal and the “Upset Canoe Race”, which involved teams of two running from the beach to correct overturned vessels.

“They would line up the č’apac at one end over here. They had a trolling boat to mark the starting line,” explained Williams of how the upset canoes were arranged. “A guard would be on the beach, he would shoot off a shotgun in the air to start the race.”

“It was really exciting to watch,” he smiled.

An interesting part of Nootka Days was clearly an influence from potlatches and cultural gatherings, where mistakes during an event were handled before the audience.

“Some were really fast dances, some were slow,” he added. 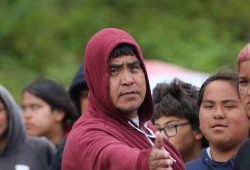 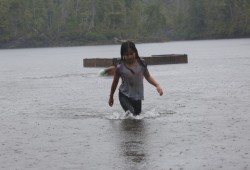 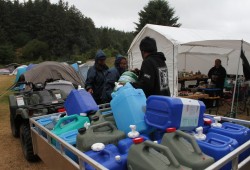 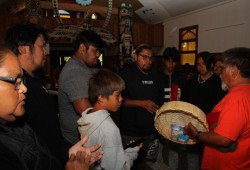