A healthy herring spawn was spotted in Yuquot on March 11, leading residents to collect k̓ʷaqmis. Early this year coastal locations witnessed the largest volume of roe people have seen in many years. (Photo submitted by Lesley Sugar Thompson)

Dianne Ignace saw something remarkable when she returned home to Hesquiaht Harbour in mid January. Nearly two feet of herring eggs lay on the beach at the remote village site where Ignace has lived with her family for the last 47 years, resembling snow drifts on the Pacific shore.

“It was incredible. That was the longest spawn I’ve seen here in 30 years,” said Ignace, noting that when the tide went out a foot of herring roe was revealed. “On the ocean floor when the tide was out you can see how deep it is.”

The site where Hesquiaht people have lived for thousands of years serves as a valuable indicator of the ocean’s health. A preliminary report released this summer by Fisheries and Oceans Canada identifies Hesquiaht Harbour with other sites across the west coast of Vancouver Island where a significant spawn from herring, or ƛusmit, was observed early this year. Surveys undertaken across the island’s west coast cite 23,707 tonnes of herring biomass this year, showing an encouraging volume amid results that have wildly fluctuated, dropping as low as 5,407 tonnes in 2012.

As a keystone species for salmon and other marine animals, the rich volumes of herring roe, which are called k̓ʷaqmis or siiḥmuu in Nuu-chah-nulth, was met with excitement from those in coastal communities.

“Herring, they’re a forage fish for other animals, salmon, lingcod, which Nuu-chah-nulth also harvest for food and economic purposes,” explained Jim Lane, Uu-a-thluk deputy program manager. “When you’re the forage fish, you’re kind of the bottom support of everything above it.”

The commercial herring fishing was once a staple amid the coastal harvesting industry, peaking at nearly 70,000 tonnes of catches off the coast of Vancouver Island in 1959. But in recent years the species has not been deemed healthy enough to sustain a commercial catch, and an industrial-scale fishery has not occurred off the west coast of Vancouver Island since 2005.

Other areas on the B.C. coast have also remained closed, with the exception being east of Vancouver Island, where a commercial fishery has opened for a few weeks each spring in the Strait of Georgia. This fishery targets pregnant females full of roe for markets hungry for the eggs, most of which are in Asia. Conservation groups have lobbied Ottawa to close this fishery as well.

In recent years the Nuu-chah-nulth Council of Ha’wiih Forum on Fisheries has called for the closure of a commercial fishery off the island’s west coast. This measure is in place to give populations time to improve, and now Joyce Murray, minister of Fisheries and Oceans Canada, has mandated for specific rebuilding targets in 2023.

But it’s yet to be determined what sort of a commercial fishery the west coast of Vancouver Island could support, said Lane.

“Certainly, I don’t think you could sustain fisheries like they have in the Strait of Georgia, which is a much higher biomass,” he noted.

Biologists closely watch the volume of herring in relation to a limit reference point, which is a critical level that the measured biomass in a particular region needs to reach.

The limit reference point for the west coast of Vancouver Island is approximately 14,000 tonnes of biomass. According to survey data compiled since 1950, the wave of herring volume has dipped below this point a few times. The most recent drop was in the mid 2000s, remaining under this critical threshold for a decade until rising in 2015.

For Dianne Ignace, the life she witnessed at her home early this year was a reminder of the 1970s, when the recorded volume of herring peaked at over 90,000 tonnes midway through the decade.

“Back in the ‘70s it was just a heyday of herring. There was just so much life, and the k̓ʷaqmis used to be on the kelp and rock weed,” she recalled. “We don’t have nearly as much growth down on our shores anymore. It’s pretty barren around here compared to what it was in the ‘70s.”

Herring are one example of several species that have declined at the ancient village site. Ignace recalls the bounty that she used to collect with her late husband Dave at Hesquiaht Harbour, before a resurgence in the population of sea otters took hold.

“We used to go dig a 100-pound sack of clams in 15 minutes in an area the size of my kitchen table,” she said.

“Hesquiahts have lived here for over 6,000 years,” continued Ignace. “There was over 1,000 people here and they lived off the clams on the sandbar as one of the staples in their diet. It took the sea otters six years to clean those clams off that far, and they’re still not back.”

Along with protecting habitat like eelgrass, controlling fisheries is one of few means people have to help Pacific herring populations to rebuild. A big challenge currently for the keystone species is other animals, said Lane.

“What we’re seeing is a big driver is predation…hake has taken the big chunk,” he said. “The amount of predation from humpback whales, which surprised me, stellar sea lions and hake, we might not get out of this unless there’s a real change.”

Ignace remains hopeful that the scene she witnessed outside her house early this year could bear future abundance.

“This spawn we had on the beach, hopefully a lot of them hatched,” she said. 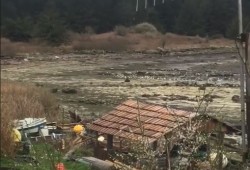 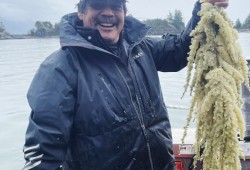 Other Stories in
Environment, Fisheries