Agnes Jack sits by a gravestone for her daughter, Melissa Jack, who passed Oct. 7, 2021. The recently placed stone had to be moved after it was installed in the wrong location at a Port Alberni cemetery. (Denise Titian photos)

So, Agnes was excited when she was able to arrange to have a proper stone placed on her daughter’s grave at Alberni Valley Memorial Gardens.

In a barter arrangement, Jack had traded eagle feathers in order to have the stone made in Port Coquitlam. In a miscommunication, the stone was inadvertently sent to Kyuquot, where it was brushed then transported to Campbell River by a relative. Agnes picked up the stone and delivered it to the Port Alberni cemetery in late August, 2022.

“I got a call from the cemetery worker, she was excited and told me that Melissa’s gravestone was installed, so me and my friend went up to look at it,” Agnes recalled.

To their surprise, there was no headstone at her daughter’s grave. They searched the area but couldn’t find anything.

“We saw the cemetery workers having lunch so we walked over to ask them about it,” said Jack.

A worker led Agnes to a newly installed headstone, several feet away from where she’d been leaving flowers all year. She immediately knew it was not where her daughter was buried.

“When I selected the plot, I picked a spot where there were no other graves nearby so that other family can be buried together, there,” she recalled.

In addition, she remembered the graveside service was on a rainy day, and the open grave was filling with water.

Jack recalls the pastor apologizing for the water and cemetery workers running a pump with a hose leading to a distinctive tree, nearby, at the edge of the forest. At the graveside service, Jack recalls that mourners didn’t have to worry about stepping on graves because there were none nearby. So, when she saw that her daughter’s headstone was placed less than two feet away from an older gravestone, she knew something was wrong.

According to Jack, the cemetery worker told her that he installed the stone according to a map he was provided.

To remedy the situation, the stone was immediately moved several feet away to another plot, but Agnes is not certain it is the correct spot. She says the new location is closer to where she remembers the grave to be, but in the 10 months since the burial, the ground has dried and hardened, and it is hard to tell where the actual gravesite is.

Not knowing for certain where her daughter is buried has traumatized the still-grieving mother.

“It brought me right back to the first day of grieving – I’m glad my friend was there with me,” said Jack.

Donna Liberty of Yates Funeral Services acknowledges that there may have been a mix-up on the location of Melissa’s grave. She said that Melissa’s next of kin was her spouse and it was him that selected the plot.

Liberty stated that the cemetery strives to work with Indigenous families who abide by the four-day cultural practice of laying loved ones to rest. Sometimes mistakes happen in the rush.

“We send the paperwork off to the cemetery workers who first probe the plot to make sure it’s empty,” said Liberty.

She said the Alberni Valley Memorial Gardens cemetery is nearly 100 years old and sometimes records and maps don’t go that far back. Sometimes, she said, there’s problems with the selected plot. It could be tree roots, boulders, or underground springs. When that happens, Liberty says cemetery workers move on to the next available plot.

In this case, the employee that arranged for the burial has moved on from Yates Funeral Services.

“We don’t know if our files are wrong and we can’t question the employee,” said Liberty.

Liberty said that the cemetery workers immediately moved the marker within an hour of Agnes notifying them that it was in the wrong place. They placed the marker in the spot Agnes had been laying flowers a couple of rows away.

The cemetery will probe the area to determine the exact location of Melissa’s grave. Liberty says it’s on her list of things to do but there is no timeline, with a recent turnover in cemetery staff.

“I’m sorry Agnes is angry with us. We will find the correct answer,” she promised. 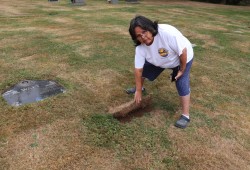