Wesley Frank, seen standing in the canoe, paddled along the coast with family and supporters to marry Kyra Sam according to Nuu-chah-nulth traditions. Pictured are the travellers at the end of their journey, singing at Canal Beach on Sept. 18, awaiting permission from Tseshaht members to come to shore. (Eric Plummer photo)

Canal Beach was full of Nuu-chah-nulth-aht on Sunday, as about 300 witnessed a traditional marriage proposal that came after a 16-hour canoe journey from Tofino.

Wesley Frank ventured into Tseshaht territory on Sept. 18, landing at Canal Beach at the south end of Port Alberni to meet Kyra Sam and her large family. Frank came with family and friends who paddled two canoes the day before down from Esowista and up the Alberni Inlet to China Creek Marina, which is located south of Canal Beach.

“It was a really good experience. It was sunny, we managed to get all the tides,” said Frank, who had been closely watching weather reports for Clayoquot Sound in the days leading up to the journey. “We didn’t experience a lot of fatigue through the journey, a lot of it was afterwards.”

The group brought three extra paddlers, and were accompanied by two speedboats and a commercial fishing boat owned by Wesley’s father, Elmer Frank. This helped to supplement the chilli and sandwiches the paddlers took with them.

“My dad’s commercial boat has a kitchen, and they were also fishing along the way,” said Wesley. “We also had fresh fish on the boat for lunch.”

The journey was guided by a close attention to Nuu-chah-nulth protocol, and the paddlers asked permission to pass through Yuułuʔiłʔatḥ territory as they headed south.

“As we were passing Ucluelet I was fortunate enough to have one of their fishermen out there, so we asked permission to go through their territory and told them what we were doing,” said Wesley. “He got a hold of two more young men from his community and got them to join us, and then continued on as a support boat as well.”

Frank had proposed to Kyra Sam on Aug. 5, but chose to undertake the traditional journey from his Tla-o-qui-aht home to marry her according to Nuu-chah-nulth culture.

“What I did was a full-on kliptwa, which means we welcomed her into our family,” said Wesley. “We handled business right in front of her parents’ house, we gave her a name from my uncle’s household, which I’m from. It was a full-on traditional wedding that day.”

Frank, who is 25, recalls the influence of his grandfather, the late Ray Seitcher, in the decision to follow the traditional marriage.

“A lot of it had to do with what my grandpa told me when I was growing up,” he recalls. “If you have a woman in your life that’s being like your wife, you’re treating her like your wife, you should do it the right way and make it happen.”

Following Nuu-chah-nulth culture, Frank partook in various challenges given by the family of his fiancée, before Kyra’s parents Samantha Gus and Richard Sam agreed to the marriage at their house. A dinner followed at Maht Mahs, with cooking provided by Kyra’s family, including fish her father recently caught in the Somass River. Kyra’s father said the family fed approximately 300 people at Maht Mahs, something that his new son-in-law didn’t expect would be offered.

“I feel really proud,” reflected Wesley of the experience. “My uncles, who hold seats in my nation, stood beside me to make sure I did it correctly.”

He said the necessary business isn’t finished, as a thank-you dinner for his paddlers will be planned.

“Culture is very important, strong and alive if you’re able to discuss with the right people,” said Wesley. “It is possible if that’s what you want to do.” 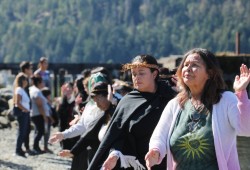 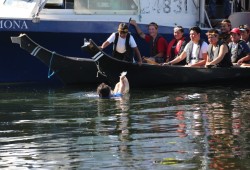 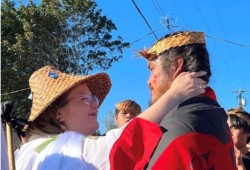