Deandra Jack does an exercise at the House of Unity on Sept. 15, during an event held for children, teenagers and young adults, with input from older generations. Mowachaht/Muchalaht hosted the northern region youth gathering from Sept. 12 to 16, attracting over 100 participants from northern Nuu-chah-nulth nations. (Eric Plummer photos)

Although she was spending a week surrounded by over 100 people in the Mowachaht/Muchalaht First Nation’s big house, Haily John-Hansen didn’t have to think long to recollect the days her young family was under lockdown.

The young mother of three lives in the Ehattesaht Chinehkint First Nation’s reserve community of Ehatis, a remote village northwest of Campbell River that was hit by a COVID-19 outbreak in the final weeks of 2020. Over quarter of the village’s 102 residents got infected, bringing severe restrictions as the community struggled to keep the virus under control. Ehatis is located next to Zeballos, at the end of an inlet on Vancouver Island’s northwest coast.

“It was hard,” recalled John-Hansen, who is 22 and a member of the Ka:'yu:'k't'h'/Che:k'tles7et'h' First Nations. “My kids just wanted to go play out, but everyone was told to stay in their own homes for two weeks. That was really hard, my kids do like to play out every day.”

In an effort to continue encouraging youth to develop in ways not possible over the first two years of the COVID-19 pandemic, the Mowachaht/Muchalaht First Nation hosted a youth gathering at their big house in Tsaxana Sept. 12-16, which is located near Gold River. The five day gathering was for the Ka:'yu:'k't'h'/Che:k'tles7et'h', Ehattesaht, Nuchatlaht and Mowachaht/Muchalaht First Nations, providing opportunity to share stories, reconnect and learn about issues prevalent among young Nuu-chah-nulth-aht.

John Amos, a youth coordinator with the Mowahchaht/Muchalaht, has witnessed the transition among his First Nation’s youth as the community emerged from COVID-era restrictions. Like many First Nations, families were often discouraged from physically interacting with others outside of the immediate household.

“They had to re-learn everything, to be social,” said Amos. “We had to regain their trust. We had to show them consistency. It took us a while just to get back on track with them.”

With several generations present, Amos saw the children, teenagers and young adults gain confidence, evident in how they spoke and interacted in the Mowachaht/Muchalaht House of Unity, where the youth gathering took place.

“On the first day, they were all like clams, clam shut,” observed Amos on the second last day of the event, when it was apparent that the supportive atmosphere of the gathering was taking effect. “By end of yesterday they were blossoming. They would come out of their shell - you could see it, the changes in the youth. They’re more open, they’re more social.”

John-Hansen found it particularly beneficial to hear other’s stories. At times she identified with the struggles of other people, as the multiple generations reflected on their upbringing, a process John-Hansen found both “comforting and sad, because it’s a really traumatizing experience.”

“I grew up with two alcoholic parents, very toxic,” she shared. “Always having parties at our place, I used to have to always watch my brothers.”

“We had to leave in the middle of the night too, just about any time they drank,” added the young mother, who raises her six, three and one year old with their father in Ehatis. “I said to myself, ‘I don’t want to be how my parents were, and for my kids to grow up in an alcoholic home, a toxic home’. I changed quite a bit of things. I don’t drink, I’ve been sober for a while.”

Many elders came to offer their perspectives to the youth gathering, including Hesquiaht member J.C. Lucas, who lives in Nanaimo. He hoped that that gathering would encourage young people to be more open to others, interacting when the opportunity arose rather than just at a cell phone.

“Lots of these people say, ‘I don’t know my language.’ But they’re kind people. That’s what the culture brings, and a lot of other things of course,” said Lucas.

He grew up in his ancestral home at Hesquiaht Harbour, before attending residential school.

“A lot of these people are already quite kind and loving. They understand our roots, a lot of them are getting to know these things more and more as we go,” said Lucas. “Hišuk ma c̕awak, everything is one, and when you start operating on principles like that, it’s a natural result.”

Topics for the gathering were selected by a group of Mowahacht/Muchalaht youth, including suicide, bullying, drugs, alcohol and setting boundaries while parenting.

Going M.I.L.E.S was brought in to lead workshops, a group of professional youth facilitators that includes Dakota House, an actor known for his role in the television series North of 60.

House ran a session focussing on how bullying can be present in social media.

“You can say something to someone, and it will crush them and they won’t even know,” he said during the session. “It could change the direction of their whole life.”

Ahousaht elder Cliff Atleo also attended the gathering to offer his insights and knowledge. Atleo held a talk about the hereditary system of governance, which managed Nuu-chah-nulth Ḥahahuułi for thousands of years until Canada’s Indian Act enforced an elected structure in the last 1800s.

“My dad said, ‘Mankind didn’t create that system. It’s gifted to us by the creator’,” said Atleo, quoting the late Mark Atleo, whose Nuu-chah-nulth name Ah-ah-pwa-iik means ‘to say the right thing always’. “The biggest challenge we have as Indigenous people is the stupid democratic system.”

Atleo added that a central problem is that elections put “power in the hands of commoners.”

“It can never be right if we allow the commoners to run the role and responsibility that belongs to the chiefs,” he said. 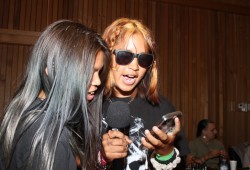 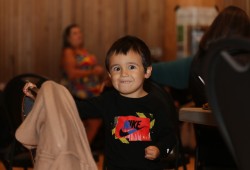 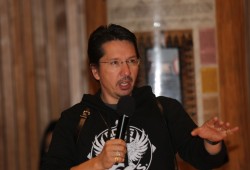 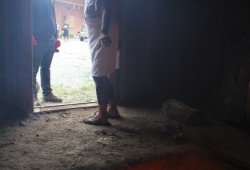