Myra Mack lives near Tseshaht’s Haahuupayuk Elementary School and can see the playground from her living room window. She likes to watch the children playing at recess and sometimes she catches a glimpse of her son playing there.

On Monday, September 26, she noticed something that not only surprised her but also touched her heart. It was shortly after 11:00 a.m., long after the children went inside from recess, when she glanced out the living room window and saw that four of the swings on the swing set were moving – and not just a little bit. She captured a video of the four swings moving as though unseen children were playing on them.

Once posted to social media, people began showering the comments section with praying hands and orange heart emojis, writing that the spirits of the children they believe to be buried near where Alberni Indian Residential School once stood were there.

“The grass and trees aren’t moving, either,” noted Tasha Dennis in the comments.

The four swings were moving at different rhythms, some going higher and faster than others. Mack said the students from the school had long finished their recess, so the swings should have stopped moving by the time she saw them.

“I take a peek outside the window all the time, sometimes to see my son during recess at Haahuupayuk School, but this is the first time seeing activity in the park,” she told Ha-Shilth-Sa.

“This project works to heal and bring answers to those affected by the Alberni Indian Residential School,” they said on the Tseshaht First Nation website.

In March 2022, Tseshaht First Nation announced that it had hired a company to conduct drone mapping in areas near the former residential school site, now the location of Nuu-chah-nulth Tribal Council offices, Maht Mahs and other Tseshaht buildings. The work was being done in preparation for ground penetrating radar scanning now being conducted in September 2022.

Mack recalled seeing something startling outside her home, back in March.

“The first day when they were doing the drones, mapping, that day I saw a human form walking from the park towards the bush,” she recalled.

It was a young boy; she estimates his age to be about 12.

“He was wearing black pants and white shirt, he kept looking back, like someone was chasing him,” she shared.

“I told Darcy [Mack’s spouse] that couldn’t be an actual child, it was 1C outside, and he had no jacket,” she said.

Concerned, Mack called around to nearby neighbors to ask if they’d noticed anything. But nobody else saw him, said Mack.

Then, six months later, the ground penetrating radar work was being conducted nearby.

“I saw the swings. There was no wind. No kids near. They had gone inside long before from recess,” said Mack.

She looked away to tend to her young daughter, she estimates for about five minutes. When she looked outside, the four swings were still moving.

Mack believes that the start of the work to find possible unmarked graves is waking the little spirits.

And many other Nuu-chah-nulth-aht share Mack’s beliefs. Her video, posted two days earlier, has more than 95,000 views and dozens of comments.

“They were found. They just finished the ground-penetrating radar. They are free,” said Haul Mack.

“They want to be seen and heard, too…not odd that it happened on a new moon,” said Amanda Beth. “Country is waking up to the work we need finish, getting our loved ones where they need to be.”

Mack said that she was invited to the school playground later that afternoon, after school let out, to take part in a cleansing ceremony led by Tseshaht cultural workers. They were there to let the children know they are free to join the spirit world now. Ross asked Mack to join them for a cleansing at the park. They told the spirits that it’s time to go home.

“It’s bittersweet, it’s so sad,” said Mack. “We don’t know why they died or how they died, but we know where they died. But they’re found now.”

Mack didn’t go to residential school, but her late mother went to AIRS.

“I feel really connected to all that’s going on. I feel for survivors. If my mom were still here, I’d want to support her as much as I could with all the work that’s going on,” said Mack. 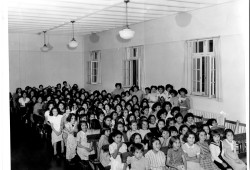