Ucluelet Secondary School (USS) began preparing for the Legacy of Hope Exhibit within days of welcoming their students back from summer vacation, ahead of the deadline for National Day for Truth and Reconciliation on September 30th.

Jason Sam, program coordinator for the Clayoquot Biosphere Trust, had been organizing for six months prior to the event. On the second day of school Sam and USS teachers began working together, introducing the project to students at the end of the first week.

Sam organized for students and residential school survivors to meet at Tin Wis, the former location of Christie Residential School, for stories from the institution to be shared with students.

Students then took to the classroom, and worked on projects that would be displayed in the exhibit.

Sam said the exhibit was broken down into three themes: truth, honor, and reconciliation. History 12, BC First Peoples 12, and Social Studies 9 worked on truth, Art 9 and English 10 worked on honor, while Literary Studies 11, Nuu-chah-nulth 8 and 10 worked on reconciliation. There were 150 students involved in the project.

The Legacy of Hope Exhibit, representing the 2008 Canadian government apology, was in the very center of the room. In this interactive piece of the exhibit folks were invited to leave a message to survivors or the people of Canada.

Nancy Woods, Grade 10 English teacher at USS, said that students were learning about didactic poems, which are pieces that explore truth, morals, and principle their messages.

Students worked in teams to create paired poems. One poem exploring the heavy emotions and experiences of the survivors, the other exploring its healing counterpart.

“What better way to explain the moral injustices, and then the strength of the survivors than this juxtaposition,” said Woods.

Grade 10 English students, the authors of the poems, spoke with Ha-Shilth-Sa about their experience working on them.

Yemaya Windle, student and author of the poem Healing, said it was an eye-opening experience listening to the survivors tell their stories.

“We wrote how painful that was that they couldn't be around their family where they felt most safe,” Windle said. “I wrote how, how when they finally got home, how it was a slow healing process for everything that they've been through.”

“It was really hard to write because, obviously, I wasn't in their shoes… I'm never going to exactly know how they felt,” she added.

Jacob Offerein wanted to capture the experience of the survivors as best he could. Offerein and his partner wrote the poems titled Isolation and Community.

“We wanted people to see the importance of family and…being social with other people,” said Offerein. “And we really wanted to do what happens if you're all by yourself - stripped of your identity… we really wanted to emphasize the culture and the people.”

“I think they find the value in it when you're bringing in people who actually can share their stories about going to residential schools, it kind of puts this serious veil on it, and the kids have been great,” said Sam. “It's such a hard thing to do once you start school. We're jumping straight into residential schools just to try to meet that deadline of September 30.”

Rhys Cannon, a Grade 10 English student and author of the poem Fear, said that he had been learning about Canada’s residential schools for a few years, but didn’t know the extent of what the survivors experienced.

“I've heard stories [before], but I never heard it from the actual survivors,” said Cannon.

“[Truth and reconciliation is] really important because this stuff needs to be addressed,” continued Cannon.  “All the calls to actions need to be dealt with. So I think it's really good that it's going on.” 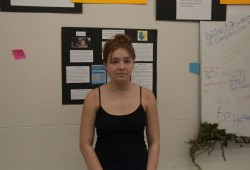 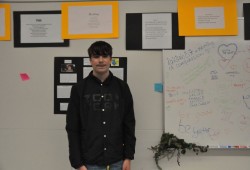 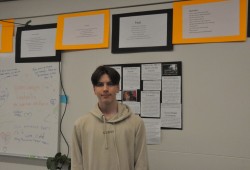