First Nations leaders and the provincial government have been working to eradicate racism directed at Indigenous people in public health care settings, after a report documenting disturbing incidents caught the attention of lawmakers in late 2020.

In Plain Sight was prompted by allegations of an organized “Price is Right” game involving guessing the blood alcohol contents of Aboriginal patients in B.C. emergency rooms. Former judge Mary Ellen Turpel-Lafond was appointed to investigate the allegations and recommend actions.

While Turpel-Lafond found no evidence of an organized game, she did find anecdotal signs of multiple activities that resembled the allegations, she said.

“I am afraid to go to any hospital,” said one Indigenous respondent in the 2020 report. “When I do have to, I dress up like I’m going to church.”

Among the top negative assumptions circulating in B.C.’s health care system is the idea that Indigenous patients are less worthy, that they’re alcoholics, that they’re drug seeking and that they are incapable of adhering to treatment and medical advice, said Turpel-Lafond when In Plain Sight was released.

In 2018 the First Nations Health Authority began work on its own set of standards to end racism in health care settings. They call their newly released Cultural Safety and Humility Standard a first-of-its-kind to end systemic racism in British Columbia’s healthcare system.

“The existence of Indigenous-specific racism in B.C.’s healthcare system is long-standing and pervasive - and its ongoing presence continues to have harmful impacts on the overall health and well-being of B.C. First Nations people today,” said the FNHA in a statement.

“'Anti-racism' has been getting a lot of discussion, even more so recently, and this new practice standard highlights the importance of nurses to speak up when they witness racism, blatant or hidden, directed at clients or colleagues,” said Victoria Dick, a nurse working with the Nuu-chah-nulth Tribal Council. “Efforts to eliminate racist and discriminatory care of Indigenous peoples should be occurring at all levels of healthcare in all places where our people access healthcare services.”

The FNHA received more than 1,100 comments during the public consultation phase.

A First Nations-led technical committee was struck. With support from FNHA and input from Métis Nation BC and the Health Standards Organization, work began on drafting a new standard based on input from First Nations people, leaders and healthcare professionals across the province.

“What motivates me in this work is knowing that somewhere today in B.C., a First Nations person is seeking medical attention and is being treated in a racist, discriminatory manner,” said Dr. Nel Wieman, the FNHA’s deputy chief medical officer and part of the new standard’s technical committee. “This CSH standard is signaling to the B.C. health system that racism is no longer acceptable and there is a way forward to making the system safer for First Nations and other Indigenous people.”

“As an Indigenous-led process, this framework sets a clear standard of care in our ongoing work to ensure all residents of B.C. are treated with dignity and respect and have access to culturally grounded health care services,” said Keith Marshall, president of the First Nations Health Directors Association.

Gerry Oleman, a St’at’imc Nation elder and co-chair of the health standard’s technical committee, said the Cultural Safety and Humility Standard will bring justice for all people in Canada.

“We set a high bar about dealing with cruelty and fairness,” he said of the standard.

Dick said that nurses with the tribal council already strive to deal with their clients in “the Nuu-chah-nulth way”, a holistic approach that already aligns with the new FNHA standard.

“Nurses being reflexive and aware of themselves and working to build respectful relationships with clients on their healthcare journey is essential to practice,” she said. “Creating safe and respectful spaces, allows clients and nurses to value, explore and incorporate traditional health and wellness alongside Western medicine.”

The Ministry of Health released its annual In Plain Sight progress report on Dec. 1. This follows up on the 24 recommendations to address Indigenous-specific racism and discrimination in the initial 2020 report.

A media release stated that eradicating Indigenous-specific racism in British Columbia remains a top priority. The progress report highlights work on recommendations from In Plain Sight.

"I'm proud of what we've accomplished in this short time but recognize much more needs to be done. I look forward to continuing this work with Indigenous leaders, health-system partners and health authorities throughout B.C.,” said Dix.

The Ministry of Health notes that significant developments have occurred in government to facilitate recommendations made in the IPS. Changes have been made to the Human Rights Code of B.C. to include Indigenous identity as a protected ground for individuals from discrimination.

In addition, a new Anti-Racism Data Act was introduced as a step to dismantle systemic discrimination faced by Indigenous, black individuals and people of colour. Data collected under the act will help identify gaps in programs and services and allow government to better meet the needs of racialized British Columbians. The act is the first of its kind in Canada to be co-developed with Indigenous peoples, according to the Ministry of Health.

In keeping with Recommendation 8, the ministry says the final stages of the development of the Cultural Safety and Humility Standard are complete.

"While B.C. has made important progress, there is much more work to do to eradicate Indigenous-specific racism, foster cultural humility and create cultural safety to support improved health outcomes for all Indigenous people in B.C.,” said Dix. “The province remains absolutely committed to implementing all 24 recommendations of In Plain Sight, and we will continue to work together with Indigenous Peoples, all orders of government, health-system partners, individuals, service providers, regulatory bodies and health-system leadership to make this commitment a reality." 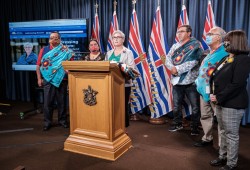 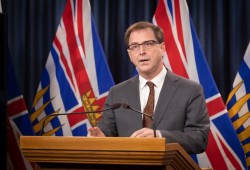 Aunt fights institutional barriers to get proper care for niece

Island Health says it works to involve patients in decisions regarding their care, but a…

In effort to address ongoing critical gaps in our understanding of Indigenous health, EHN Canada…

25 ER visits in a year: Elder’s plight points to need for health advocacy

Just over a year ago, the ache in Cheryl Amos’s lower abdomen had become unbearable, leading her…

A follow up report on discrimination in B.C.’s health care system is stressing the need to…

Other Stories in
Health

Ahousaht schools are back in session after flu outbreak hits community