‘Balance of harms approach’ to COVID-19 worked, but First Nations were left out of major decisions, says report

Ehattesaht Councillor Ernie Smith receives the Moderna vaccine for COVID-19 on Jan. 4, 2021. His community of Ehatis saw 28 coronavirus infections out of the 100 on-reserve residents in December 2020. (Ehattesaht First Nation photo)

A review of the province’s handling of the pandemic has painted a positive picture, but the recent report also notes that relations with First Nations could have been better as the government dealt with COVID-19.

In early December the Final Report of the COVID-19 Lessons Learned Review was released, an assessment of the provincial government’s management of the two-year public health emergency that encompassed multiple waves of infections, lockdowns, vaccine mandates and a complex aftermath of societal damage. Compiled by three external consultants with decades of past experience in the provincial public service sector, the report drew upon surveys and over 15,000 responses to help inform recommendations to the B.C. Ministry of Public Safety and Solicitor General.

The review notes that public satisfaction in the government’s handling of COVID-19 remained relatively high, starting at 70 per cent of respondents in March 2020 when the pandemic was declared by the World Health Organization, rising to over 80 per cent the following July, and eventually levelling out at just over 60 per cent in the summer of 2022. The province’s “balance of harms approach” in offering services and imposing restrictions did eventually meet more resistance by the time COVID vaccines were mandated in certain sectors in September 2021, states the report, which “amplified a backlash to restrictions on personal freedom”.  This backlash culminated in the Freedom Convoy protests and occupation in early 2022.

“Overall B.C. mounted a strong and generally successful response to the pandemic that bodes well for its ability to respond to the next province-wide events,” states the report.

As of the end of November this year, B.C. has seen nearly 390,000 confirmed COVID-19 infections, with 4,642 deaths – a rate that puts the province below the national per capita average for contracting the virus, and well below Canada’s incidence of fatality. In B.C. there have been over 21,000 cases of First Nations people contracting COVID-19, with 258 deaths as of April 1, 2022, plus another 41 recently infected people who died from any cause after that date, according to the First Nations Health Authority. These infection and fatality statistics comprise just over five per cent of what occurred throughout the province over the pandemic, falling in line with the proportion of British Columbians that identify as Indigenous.

Tla-o-qui-aht Tribal Administrator Jim Chisholm said that the First Nation looked to the regular updates and information from Provincial Health Officer Bonnie Henry as the “bellwether” for how the community would respond.

“The province certainly did a good job of keeping us aware of how severe COVID was,” said Chisholm. “Our people very quickly adapted to a difficult situation, made the most of it, and as a result we came out relatively unscathed.”

A big part of the Tla-o-qui-aht’s response was restricting access to the west coast communities of Ty-Histanis, Esowista and Opitsaht. Like other Nuu-chah-nulth settlements in remote areas, only residents and essential service providers were allowed in.

“We did put up restrictions on Opitsaht, for example. We had people meeting the boats, making sure that it was necessary travel, that it was community members only,” said Chisholm. “We put out the word to our community: no unnecessary travel, no unnecessary meeting with outsiders - and that included family members. We had people in our community who didn’t see their grandkids or family members for a year and a half.”

Measures were strict throughout the west coast of Vancouver Island, where blockades were manned outside of remote communities to restrict entry and exit to control coronavirus infection. Grocery runs outside of the communities were limited as well, but in some cases this resulted in alcohol smuggling during the first few months of the pandemic. Reports came from Kyuquot of boxes of liquor bottles coming via the regular mail flights, and in Ahousaht a tribal police force was established by the Ha’wiih to enforce the First Nation’s COVID response. This included confiscating incoming vodka at Ahousaht’s main dock and enforcing a 10 p.m. curfew to discourage interactions outside of the immediate household.

“It went so much against our culture in having to stay in our own homes and not visit elders and family,” recalls Judith Sayers, president of the Nuu-chah-nulth Tribal Council, of the hardship brought by the pandemic. “In not being able to go to funerals, that’s so integral to the things we do to support the family, be there, provide meals.”

Yet compliance with restrictions was mostly strong in coastal communities, as First Nations went a step beyond what the province recommended by restricting access to residents only.

“People complied with that because they were worried about bringing it in,” said Sayers. “I think that’s why most didn’t mind the lockdown in their communities, that they couldn’t go out.”

“There was a hardship on the community for sure, mentally and financially,” said Chisholm of the Tla-o-qui-aht settlements, which are located near Tofino. “It is expensive shopping here. I would say there is a financial impact to our community because we were trying to stop people from driving over to Alberni to buy groceries at Walmart.”

As First Nations enacted their own measures to control infection, some became increasingly frustrated with the provincial government’s inability to understand the concerns of their respective communities. For over half a year the Nuu-chah-nulth Tribal Council, Tsilhqot’in National Government and Heiltsuk Nation asked for more specific information about cases. This appeal sought data on infections near their villages, whether the cases had travelled to the remote communities and the identity of those infected if they were members of the First Nations. Bonnie Henry argued that identifying infected individuals and communities risked them being “stigmatized because of perceptions that they are disease carriers”, and in December 2020 the Information and Privacy Commissioner of B.C. rejected the nations’ request. By the following February the province finally agreed to share more case data with the First Nations’ governments – with restrictions on what would be released to the greater public.

“It took us seven months to negotiate an information-sharing agreement. That’s far too long,” said Sayers. “They weren’t ready to work with remote communities, unfortunately.”

By the end of 2020, the Ehattesaht/Chinehkint community by Zeballos was hit with an outbreak that infected over one quarter of the village. Many suspected this wave started with a visitor to the Zeballos school, but a lack of timely information hindered contact tracing. Fortunately there were no deaths, and by January 2021 Ehatis residents were among the first in B.C. to receive vaccination.

During the NTC Annual General Meeting last fall Ehattesaht Councillor Ernie Smith reflected on the mental health issues brought about by the lockdowns, a strain that made him appreciate the online sharing of Nuu-chah-nulth songs when gathering was prohibited.

“I was triple vaccinated and ended up getting COVID, but it was really mild,” said Smith. “So the vaccines did really help.”

“While the government is committed to the principles of DRIPA and made early steps in the Act’s implementation during the pandemic, it was not fully prepared for the rapid onset of the pandemic and was initially uncertain about how to collaborate jointly on emergency measures,” states the COVID-19 report.

Sayers saw this when the province eased some restrictions for summer tourism, thereby opening up visitation to Nuu-chah-nulth territory on western Vancouver Island.

“When the province decided to open up for tourism, they didn’t talk to any First Nations people. They just did what they thought was important for the economy,” she said. “We wanted to do things like test people when they’re coming into the territories. On the highway coming into Tofino, take your temperature. We could never get agreement from the Ministry of Transportation.”

Now the NTC has begun the COVID-19 Vaccine Project, an initiative from the tribal council to collect personal stories about the pandemic experience to determine how to improve service delivery, particularly during disease outbreaks. Dr. Roger Boyer was hired to lead the project, and he presented its aims to leaders during the tribal council’s AGM in September.

Tseshaht Chief Councillor Ken Watts stressed the value of the research after the presentation.

“Knowledge is power, and I really think at a Nuu-chah-nulth level, the data that we can bring together and see can benefit all of us,” he said. 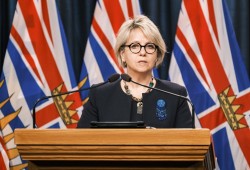 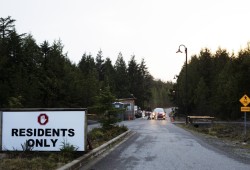 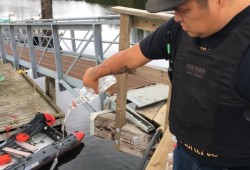 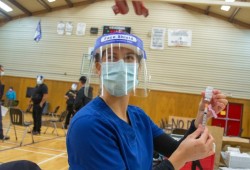 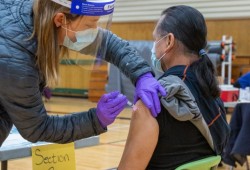 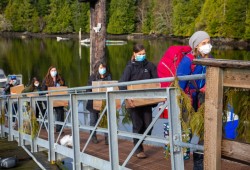 He hasn’t been inside a classroom since March 2020, but that is about to change since eight-year…

Island Health has declared an outbreak of COVID-19 at Tofino General Hospital.

Other Stories in
Health, COVID-19

‘Life is getting back to normal’ for tourism in Tofino