Chantel Moore and her brother Mike Martin. Moore was shot dead during a police wellness check on June 4. Less than six months later he brother died by suicide in a Surrey jail cell. (Facebook photo)

Six months after she laid her daughter to rest, Martha Martin is facing the unthinkable; she is preparing for the funeral of another child. Martin, the mother of Chantel Moore, the young woman shot and killed by Edmunston, NB police during a wellness check last June, has made another long journey back to her west coast homeland after receiving word that her son has died.

Michael Martin, age 23, was found deceased in a city jail cell after an apparent suicide. Martin explained that her son had been struggling lately but he had hopes and dreams.

“My son was living on the streets. He struggled with addiction, got himself in trouble and ended up in jail,” Martha said.

Mike was released from custody on conditions but was re-arrested and placed in custody at the Surrey pre-trial centre.

“I don’t know what he breached; that information is not available to me,” said Martha.

Martha said that her son committed suicide in his cell on the night of Friday, Nov. 13 and was found the following morning. She was notified of his death late on Saturday, Nov. 14.

But the young man had hopes for the future. In a video featuring Mike, who is was interviewed by what appears to be a support worker, he talks about how he wound up on the streets. Mike tells the interviewer that he was in foster care and felt like his needs were not being met there. At the time he thought the streets would be a far better alternative.

“I didn’t plan on staying in the streets but here I am…seven, eight years later,” he tells the camera. Mike goes on to say that his identification was stolen a couple of years ago before he went to jail. Without it, he can’t apply for assistance or for a job. When asked if he wants a job he answered that he would love to work.

Mike said it is terrible being in the streets and he hates it.

“I would like for people to help, to give me a chance but most people look at me with disgust,” he said.

Martha said that she spoke to her son in early November, about ten days before his death. She said he had planned on coming to New Brunswick to meet his dad and get a new start but then the phone calls stopped.

“He wanted to get a fresh start, look for work but he couldn’t come right away because of his conditions,” Martha shared.

Through her tears she said, “You never think you will lose two of your kids – one shot by cops, one in jail. How does this happen in jail?”

Martha flew to British Columbia from New Brunswick shortly after her son’s death. She said that an autopsy had been completed and the death is being investigated internally.

“I wait for answers; it seems I spend more time waiting for answers than getting them,” she said.

The Martin family reached out relatives seeking donations to help the less fortunate in Port Alberni. They came to the Safe Injection Site on Saturday, Nov. 21with vehicle loads of donated clothing, food and blankets to give away.

“They’re human too; in the end all our blood is the same,” said Martha through her tears, noting that her son struggled with addiction and homelessness. “We want to give some hope, we want to make a difference.”

People were offered hot drinks, soup, sandwiches and sports drinks. Boxes of comfort items, including new socks, hats and clean blankets were set out on the sidewalk for people to take what they need. Comfort packages filled with toiletries were made to give away.

One woman drove from Courtenay with boxes of comfort items. Not wanting to give her name, she said she was there to honor her brother, Mike. She and Mike lived in the same foster home at one point.

“I want our leadership to step forward and recognize that a lot of our people struggling with homelessness - and now with COVID-19 - there are less options,” said Martha.

She was outraged when she heard that the City of Port Alberni took down a homeless camp near the RCMP detachment.

“They’re being treated like they’re not human,” said Martha.

She went on to say that something needs to be done to combat addiction. There are not enough resources out there, she pointed out.

Grace Frank, Martha’s mother, helped distribute food and comfort items. She said she talks to street people and knows there are some that try sobering up, but there’s just no support.

“Some people have tried, and they go looking for an apartment, but nobody wants them once they know their history,” Frank said.

“We brought some food to people we know about,” she added. “Justine, the young lady that sits on at the bench at Dairy Queen, I heard that her boyfriend died there so she sits and waits for him to come back.”

“We need to eradicate the systemic racism in the justice system that will prevent the compounding effects of one tragic event that insidiously touches many lives,” said Nuu-chah-nulth Tribal Council President Judith Sayers.

“We can’t keep these stories silent anymore,” added NTC Vice-President Mariah Charleson. She noted that within the span of six months, Martha has had to say goodbye to two of her children. “This is another reminder that the justice system in Canada continues to fail First Nations peoples all across this country. We must demand more.”

“The Nuu-chah-nulth Tribal Council and all of its members express the deepest, heartfelt sympathies to Martha Martin, her entire family and the Tla-o-qui-aht Nation. We stand in support of Martha, her family and community at this incredibly sad time,” Charleson added.

The funeral service for Michael Martin will be held Nov. 24. Only 10 people will be permitted to attend due to pandemic restrictions. The service will be live streamed from Yates Memorial Services, beginning at 11:00.

“He would have been 24 on Jan. 27. I’m still struggling with the death of my daughter; this is so unfair,” said Martin. 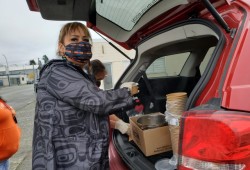 After two delays, the New Brunswick coroner’s inquest into the police shooting death of Tla-o-…

“We are a fair and independent civilian police oversight body,” reads the greeting page of the…