‘We’re all in this toxic drug crisis together’

Rob Bear Lind wants to see more supports for addiction, including a mobile clinic. “The whole Ghetto is getting an extra $2,000 a month,” he said.  (Mike Youds, Karly Blats photos)

A Port Alberni resident who routinely saves people from fatally overdosing feels governments need to do a lot more than decriminalize to prevent B.C.’s toxic drug crisis from growing worse.

The city’s overdose rate jumped by 41 per cent in 2021, the biggest increase since a provincial health emergency was declared five years ago.

Few could be as painfully aware of the severity of the crisis as Rob Bear Lind, who lives in a shared trailer along Fourth Avenue. Lind is a recovering addict who assists overdose victims in a place where help is too seldom available, behind closed trailer doors as they cling to life in a place he calls the Ghetto.

“In my trailer, I’ve handled 53 overdoses,” he said. “We have Naloxone kits in the trailer.”

Two days later the number had grown to 58. In one instance, four people overdosed at once.

Lind knows addiction first-hand. He was prescribed morphine and Percodan to manage hip pain. Unable to manage the pain through prescription, he substituted with street drugs. Many share the same tragedy: They didn’t choose addiction, they stumbled into a trap for health-related reasons.

Indigenous populations are disproportionately affected by overdose and by incarceration related to drug use. They represent four percent of B.C.’s population but 23 per cent of toxic drug events, according to health data from the First Nations Health Authority (FNHA). In 2020, FNHA reported a fatality rate more than five times greater than the overall population and a 119 per cent increase in overdose deaths in just one year.

Health advocates have long argued that decriminalizing possession of small amounts of drugs for personal use would more effectively address addiction by focusing public resources and attitudes on addiction as a health issue. They maintain prohibition has failed individuals and society as a whole, an argument long past dispute. More than 20,000 Canadians died of overdoses since 2016, when B.C. declared a public health emergency to rally resources against the crisis.

The crisis has surged during the COVID pandemic, and paramedic overdose calls rose 31 per cent on Vancouver Island last year. The cities of Vancouver and Toronto, the B.C. government, the Senate and Courtenay-Alberni MP Gord Johns are all pursuing parallel paths to decriminalize — not legalize — drug possession for personal use. Shortly before Christmas, Johns introduced a private member’s bill, legislation to move Canada to a health-based approach.

“While Canadians have been living through, another pandemic has also been impacting our communities,” he told the House of Commons. “Despite what they say, the Liberals have continuously ignored calls from health experts, police chiefs and big Canadian cities to treat the opioid crisis like a health crisis.”

B.C. is the first province to apply for a Health CanadaHealth exemption under the Controlled Drugs and Substances Act. If approved, the exemption would help reduce the fear and shame associated with substance use.

“Substance use and addiction is a public health issue, not a criminal one,” said Sheila Malcolmson, minister of Mental Health and Addictions. “B.C. is adding new health and substance-use care services almost weekly, but we know shame prevents many people from accessing life-saving care. That’s why it’s crucial to decriminalize people who use drugs.”

With police already moving away from strict enforcement, the critical test of decriminalization could be its potential to change entrenched social biases that stigmatize drug addiction, hindering pathways to treatment and recovery.

“I agree with it to a certain degree,” Lind said, pointing out that good intentions can backfire.

He expects the pandemic spike in toxic drug overdoses will continue to climb as the benefit runs out and people turn to crime to feed their addiction.

“The whole Ghetto was getting an extra $2,000 a month,” he said. “I think (decriminalization) benefits in some ways, but it depends on what you’re going to do with it. If there are more recovery options, there I can see benefits.”

Dr. Nel Wieman, FNHA’s deputy medical health officer, said the pandemic was but one factor in a tumultuous year for many First Nations. Anti-Indigenous racism in health care (sometimes referred to as the “third epidemic”), wildfire, the publicizing of unmarked graves at former residential school sites, flooding and landslides have delayed FNHA’s harm reduction policy rollout to create a framework for action for B.C. First Nations.

“From a First Nations point of view, we’re in support of decriminalization, but one thing we need to do we haven’t done, and that is to have engagement at the local level,” Wieman said. “The communities we’re talking with, they’re exhausted.”

Work continues behind the scenes with virtual health services, clinical care, expansion of treatment centres and providing safe supply as an alternative to Fentanyl-laced drugs found on the street.

With signs the pandemic may be waning, Wieman hopes more effort can be redirected at the drug crisis. Measurable progress was made in 2018-2019 before the pandemic, she noted.

“The hope is we can start a discussion around decriminalization, recognizing there are going to be community differences,” Wieman said.

Changing attitudes may be a bigger hurdle. If it passes, Johns’ decriminalization bill would enact a national strategy to address harm caused by problematic substance use.

“I do really think, for a certain segment of the population anywhere, people still regard substance abuse disorder as a personal pandemic,” Wieman said. “One of the things about COVID is that we’re all affected in a certain way. ‘We’re all in this together.’ Around that same message, that baseline, that heart line messaging, across B.C. we’re all in this toxic drug crisis together as well.”

There are only a limited number of private member’s bills that can make it through Parliament in any given session, particularly in a minority parliament. Johns said his bill drew fourth among 338 votes and he expects it will be brought forward for debate soon.

“But right now, people are dying as a result of government inaction,” Johns said. “It won’t be long before members of Parliament are forced to vote on this.” 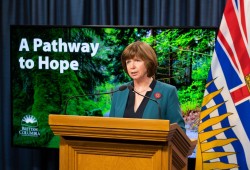 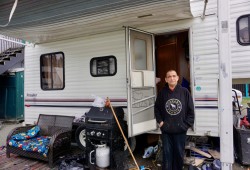