Sheila Malcolmson, B.C.’s minister of Mental Health and Addictions, is calling a federally approved exemption under the Criminal Code of Canada a “a major step in changing how we view addiction and drug use in British Columbia.” (Province of B.C. photo)

Today the federal and provincial governments announced that small quantities of illicit drugs will no longer bring criminal charges, a long-awaited move that health authorities hope will curb a fatal crisis that’s escalated since the start of the COVID-19 pandemic.

The federal government granted British Columbia an exemption under Section 56 of the Criminal Code of Canada, making B.C. the first province to not arrest, charge or seize small amounts of illegal drugs from people. Now people in B.C. are permitted to carry up to 2.5 grams of illicit drugs, a criminal code exemption that applies to opioids like heroin, morphine and Fentanyl, as well as cocaine, methamphetamine or MDMA (ecstasy). This measure will be in place for three years, starting Jan. 31, 2023.

The exemption represents “a major step in changing how we view addiction and drug use in British Columbia,” said provincial Minister of Mental Health and Addictions Sheila Malcolmson during a press conference.

“The fear of being criminalized has led many people to hide their addiction and use drugs alone – and using alone can mean dying alone,” she added.

With over 2,220 deaths, last year was the most fatal for illicit drug use since B.C. declared a public health emergency in April 2016. The province has poured millions into the opioid crisis, funding more treatment options, harm reduction support and measures to increase the supply of safer prescribed alternatives to illicit drugs. But after the toll dropped to under 1,000 in 2019, fatalities jumped with the onset of the COVID-19 pandemic and its related health measures encouraging isolation. The First Nations Health Authority reported that in 2020 Indigenous people were 5.3 times more likely to die from illicit drug use than the rest of the population in B.C.

“We know that this was exacerbated during the COVID-19 pandemic when people needed to isolate at home,” commented Provincial Health Officer Bonnie Henry at the decriminalization announcement. “Mostly younger men, who were living at home who may have had social connections, have lost those connections and are using alone, afraid or ashamed to talk to family or friends about their drug use.”

Henry added that the move to decriminalization is “a philosophical approach” to better support people who use illicit drugs. She noted that this could have impacts on the overrepresentation of First Nations people in the criminal justice system.

The provincial health officer noted the shift in how government is responding to calls for decriminalization, after her report Stopping the Harm met resistance four years ago.

“When the decriminalization report came out in 2018, there was not a lot of support for it at any level,” said Henry.

“For too many years, the ideological opposition to harm reduction has cost lives,” admitted Carolyn Bennett, Canada’s minister of Mental Health and Addictions, during the press conference.

Yet Bennett said she would not support Bill C-216 in the House of Commons, legislation which is set to be voted on the day after the criminal code exemption was announced. Introduced by NDP Courtenay-Alberni MP Gord Johns, this bill proposes to decriminalize personal possession across Canada, with record expungement for past low-level drug convictions and measures for more treatment, safer supply and other harm reduction methods.

“I have some discomfort with the bill because I think it doesn’t put in place the guardrails around implementation and how you would actually be able to ascertain thresholds,” said Bennett, who noted that “starting with British Columbia is a prudent way to go.”

“It is hard to understand why the Liberal government seems unwilling to support our legislation that is intended to save lives so that more and more families aren’t forced to bury their loved ones,” said the NDP member of parliament in a statement.

Federal and provincial officials at the announcement said decriminalization will be one tool among several others needed to finally curb the rising toll of overdose deaths. Another measure is pushing ahead more prescribed alternatives to illicit drugs, such as methadone and hydromorphone.

“Putting in place a regulated safe supply of drugs is the real antidote to the toxicity of the present supply,” said Bennett.

In recent years this increase in toxicity is largely due to the prevalence of Fentanyl in street drugs. Originally designed to be a medically prescribed painkiller, Fentanyl has been blamed for a high percentage of overdose fatalities.

Amidst the ongoing opioid crisis, the B.C. government has taken aim at pharmaceutical companies with a class action lawsuit launched in 2018. The government claims that drug companies have contributed to an epidemic of addiction by deceiving prescribers and patients of the risks in taking painkillers.

“It’s time that they take responsibility for the human and financial toll that their products have taken,” said Malcolmson. 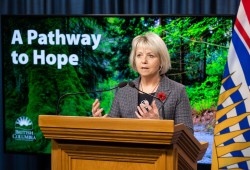