In March 2020 the B.C. First Nations Justice Council and the provincial government released a report with a list of recommendations to curb the rising number of Indigenous people being incarcerated. The justice council recently made recommendations to an expert report on how the criminal justice system can better deal with repeat offenders. (Eric Plummer photo)

Improving mental health supports when dealing with repeat criminal offenders and random violent attacks is at the forefront of an expert-led report that provided 28 recommendations to the provincial government.

Expert consultants Amanda Butler and Doug LePard say the recommendations should help keep people and communities safe by connecting repeat offenders with the supports they need to break out of that cycle.

The 14-page executive summary— A Rapid Investigation into Repeat Offending and Random Stranger Violence in British Columbia—was completed in 120 days and done in consultation with a variety of stakeholders including police, mayors and city officials, health authorities, crown counsel, community agencies and academics.

The report states that many voices are missing from consultations, mainly input from Indigenous communities.

“Consultation with Indigenous communities requires relationship and trust-building, which takes time and resources that were unavailable as part of this rapid review,” states the report. “We want to acknowledge and stress that Indigenous Peoples in Canada continue to be disproportionately impacted by harms associated with and perpetrated by the criminal justice system as well as prohibitionist drug policy.”

According to Statistics Canada, Aboriginal people account for 5.9 per cent of B.C.’s population, but in 2017/18 they represented 32 per cent of custody admissions. This shows a marked growth from a decade earlier, when 22 per cent of those brought into custody were Indigenous.

For all recommendations included in the report, the expert panel say the relevance and appropriateness for Indigenous clients must be considered and that any action taken by the province in response to the report should align with the BC Government’s obligations under the Declaration on the Rights of Indigenous Peoples Act and its commitment to the implementation of the BC First Nations Justice Strategy (BCFNJS).

The report gives many examples that have contributed to individuals breaking the law repeatedly or acting out violently. Mental Health and substance-use challenges was cited as a major factor in random violent attacks.

“BC Corrections and Correctional Health Services staff have seen an increase in the complexity of mental health issues among people admitted to custody,” states the report. “We heard that people in custody continue to be underserved, particularly with respect to access to psychologists and psychiatrists.”

The expert panel identified a shortage of resources to help people after they are released from incarceration, therefore becoming a crisis that they say must be improved.

“Many people return to precarious housing, shelters or homelessness, and back to communities where they are at high risk of returning to crime because their needs remain unmet by the systems that should be supporting them,” states the report. “Having a concrete plan and supports for the post-release period is critical for sustaining any health gains that may have been made while people are in custody.”

The investigative panel say some of the incidents have been extremely violent and the subject of extensive media coverage. An analysis of 40 cases indicates most suspects have serious mental illness or substance use, or both.

The use of stimulant drugs like methamphetamine, which may cause hallucinations and paranoia, is associated with an increased risk of violence compared to other drugs, states the report.

Stakeholders confirmed that the number of people with methamphetamine induced psychosis has “skyrocketed” in emergency departments across B.C., coinciding with the BC Centre for Disease Control’s reports of increased use of the drug.

The report goes on to say that repeated nonfatal overdoses are resulting in increasing rates of acquired brain injury and “research has robustly demonstrated that aggression and agitation are common consequences of brain injury.”

Several of the recommendations urge the province to implement better mental health and substance use supports for individuals caught in the criminal justice system.

It is also recommended that the province consult with Legal Aid BC and the criminal defence bar in B.C. on how to improve access to treatment for clients with mental health and substance use needs.

“We recommend that the Provincial Government continue to work with BC First Nations Justice Council and Métis Nation BC to ensure future investment and expansion of the Indigenous Courts, First Nations Courts as well as development of First Nations justice institutions,” reads the recommendations.

The BCFNJC made recommendations to the panel, including having the term ‘prolific offender’ abandoned by the government as they say it perpetuates harm and stigma, centring harm reduction efforts on the underlying systematic issues, as well as having a new process of consultation put in place that involves other Indigenous organizations, front-line workers and people who commit crimes.

The BCFNJC also recommends that $100,000 should be granted for the design of its pilot program in Prince George’s Indigenous Justice Centre to address the issue of criminal recidivism amongst First Nations people.

The BCFNJC believe the expert recommendations are promising because they suggest a movement away from police as the dominant service provider for “already marginalized communities.”

The BCFNJC said they won’t know if these recommendations will work for Indigenous individuals yet, but they believe that if First Nations are involved with developing and applying solutions, they will be informed by cultural safety, humility and will be trauma informed.

“Simply put, the colonial justice system has failed Indigenous peoples. When people cannot provide for themselves and experience chronic poverty, they may be vulnerable to interactions with the criminal justice system,” said the BCFNJC. “The fact that we have a BC First Nations Justice Strategy which has been endorsed by the Government of BC (in 2020) and the Government of Canada (in 2021), and that finally, there is a movement towards deferring to Indigenous peoples to apply solutions to these complex problems is an enormous shift.”

The province is working through the recommendations with its partners to identify how government can move quickly to implement changes to improve public safety.

"Most people with mental illness are not violent, and most people who are violent do not have mental illness - but there are a small number of people for whom these challenges are linked," said Sheila Malcolmson, minister of mental health and addictions in a press release.

"We want people in mental health crises to get help fast, which is why we've been investing and expanding care at unprecedented speed. But there's more work to do. Some of the report's recommendations were already underway, like expanding community-based services to help people in crisis and free up police to focus on crime. As my ministry continues to build a system of care, we will implement further changes informed by these recommendations." 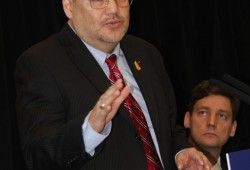 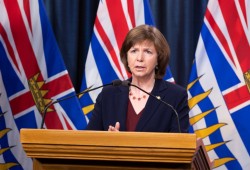 Cause of Dontay Lucas’ death not released, answers expected during trial